The big joust is this Friday, Saturday, and Sunday. If you're in Central Texas and you read this blog and want to come, tickets are on me! Just ping me offline and LMK when you'll be there.

The three days before the joust are classes, including riding classes, jousting classes, and mounted combat classes. We're loaning our horses out to a very, VERY good rider, TW, for some of these classes (she's from Colorado and couldn't bring her own horses). Reddums participated in a class on how to fall off your horse. Shockingly, he was in high demand as a horse to practice falling off of - I guess being short comes in handy sometimes?

Red was somewhat confused by this whole process. There he was, standing perfectly still, and PEOPLE KEPT FALLING OFF HIM. You can see by his ears that he's put out by these eediots who can't even manage to stay on an immobile horse. I mean, sheesh.

First, riders practiced falling on a mat. Then they moved to falling from being draped over a horse. Here's the instructor, TW, demonstrating the process: 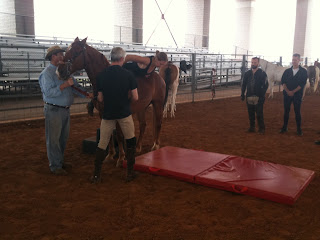 Step 1: Belly flop over the horse. She did point out that if you're in this position and about to come off, something has gone horribly wrong. 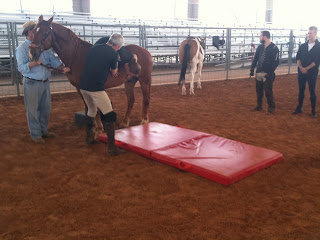 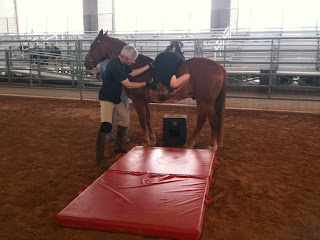 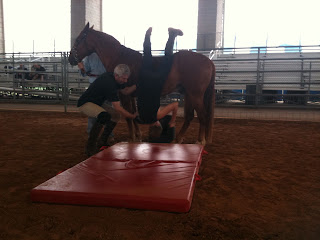 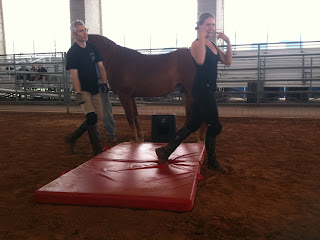 Here's a video of one of the students practicing the process:


For the grande finale, the other instructor rode Red at a walk past the mat, to demonstrate falling from a moving horse. Red, who is no dummy, stopped DEAD as soon as he felt his rider begin to "lose" his balance. Fortunately he was close enough to the mat to make the fall work out, but we all laughed at how put out Red was about losing his rider. At the walk.


Saga was ridden in one of the two jousting class. Apparently he was feeling pretty lazy, and his rider was concerned about his unbalanced canter, although she said he felt 100% in walk and trot. I ended up getting on him in the evening, and it was like riding a keg of dynamite. There was a ton of stuff going on in the arena - lyst ropes being set up, plastic bags everywhere, people riding in full armor, a golf cart zooming around - and he was bouncy. However, we made good use of that energy and did a lot of lateral work to see if he was off either direction, and he wasn't. He settled down and we did a little canter work, and everyone agreed that he's unbalanced and strung out, but not hurting anywhere. He seems to be a tiny, tiny, bit short on the LH, but it is consistent and more like a muscling problem than something wrong with a joint or tendon. Again, we're going to work on building his strength up with transitions, sidepassing, and backing, as well as cavaletti and such. Just not this weekend!


The REAL star of the day, however, was Cash. I think he's officially not retired anymore - certainly HE seems to think he's not. Over the last couple of months, we've been upping his workload a bit - 3-4 rides per week, WTC and a little lateral work. He's been doing amazingly well - stuffs his head in his bridle and is ready to work. Yes, he's stiff, but we give him a long warm-up and do a little canter early on to loosen him up, and he's really happy to work. He's even been doing passes at the quintain at home, and a little mounted combat work. I decided to bring him to the joust, since there were a couple of classes that he could participate in with the appropriate rider. He was actually our first jousting horse, although it's been a while since he's done it.

Yesterday was the first of the jousting classes, where riders worked on seat and position. TW (the one "falling" off Red in the still photos) rode him. Of course I was a horribly nervous horse mom - I mean, she's a great rider (way better than me) but still... you worry. But then I got this text from her:

"I am completely in love with Cash. He is AMAZING!!!! You should be a very proud horse mom!"

Apparently they rocked the class and she had a blast. She loved how sensitive he was and how easy he was to maneuver ("You can half-halt with one finger, and do a leg-yield just by shifting your weight!"), and she said she completely forgot she was riding in a side-pull after the first five minutes. The jousting instructor (who is even a more amazing rider) even got on him to demonstrate a few lateral movements that are handy for jousting, and he even offered a few piaffe steps (before y'all freak out, Cash was schooling piaffe/passage steps about 100 years ago). Of course I wasn't there to see any of this, but I'm really, REALLY hoping that someone got pictures or a little video of it. That's my boy! He got a long hand-walk last night and a bute just 'cause, but looked fantastic and half his age. Everyone is keeping a very careful eye on him, but so far he's settled in like the pro he is and is everyone's favorite pony. I'm pretty sure that I'm going to have to check trailers and suitcases to make sure nobody tries to smuggle him out at the end of the tournament!

I will try to provide daily updates, but didn't get home last night till after 11, so I'm a little behind. Fingers crossed for another great day!

PS. Found another scorpion corpse last night when I got home. That makes SIX DEAD SCORPIONS!!!!