And then there was JOUSTING!!!!

Despite the rather impressive storm on Thursday night, the first day of jousting ended up being quite nice. In the morning was the beginner joust, which Cash was supposed to take part in... only his rider's saddle slipped on the first run, and that was pretty much the end of that plan. Cash can be... shall we say... speedy down the lane, and after that mishap it became apparent that retiring would be the better part of valor.

(No, nobody bothered to inform Cash that 24-year-olds are supposed to be "old and slow." Somehow he missed that memo, I think.)

Next up was the Skill at Arms. These are feats of skill that knights used in medieval times to train for jousting and fighting - for example, hitting a quintain, slicing cabbages on posts, or throwing spears at a target. The hubby rode Red for this, since he's quite maneuverable and easier to rate speed-wise than Saga is. As usual, Red was a star and hubby did quite well.

That afternoon was the first round of jousting. Over the course of the weekend, each competitor rode three passes against eight other competitors, for a total of 24 runs. It doesn't sound like much, but those lances are pretty heavy! Not every competitor got to joust against everyone else (there were something like 36 jousters total), but riders were allowed to decline certain pairings. For example, there are a bunch of us here in central Texas that joust against each other pretty regularly, and the organizers did an amazing job making sure that we got to joust against folks from other places.

Saga was pretty amped up, so before each joust, I'd tack him up and take him into the arena to warm him up. The first few times, it took almost half an hour of steady trotting before he was even a tiny bit interested in taking a break. This despite the twice-daily handwalks he was getting! There's no substitute for turnout, that's for sure.


During the actual joust, it's a bunch of standing around until it's your turn, and then it's a huge adrenaline rush to get your runs in. Some of the better-trained jousting horses will stand at the entrance to the lane until their rider cues them to go, but Saga hasn't learned that trick yet - AT ALL. In fact, he's pretty much of a brat right before the run, so I lead him up to the lane, get him more or less straight, and then let go when the other rider is ready. I think the lane reminds him of a track start box, because he takes off like a shot. I've been working on him to do a nice collected canter down the lane, but it's a different story when you're riding one-handed in full armor holding a lance in a competition than when you're at home. Fortunately, the hubby is pretty game to ride whatever Saga gives him, and he's got quick reflexes!

Because I was heading Saga for the entire weekend, I don't have any pictures or videos of any of the runs. There are some professional shots, but I won't be able to post those until they're all in and we've purchased the ones we like. But... be patient, and I'll get them eventually.


The high point of the weekend for the hubby, however, was the mounted combat Saturday morning. There was a melee of 38 riders - the biggest in hundreds of years - all trying to bash each other with padded foam swords. And when I say "padded swords," what I mean is 1 inch diameter sticks made of rattan (a type of bamboo), covered in high-density molded foam. These things are heavy, weighted like real swords, and they pack a wallop in the right hands. My hubby has been doing ground combat with similar weapons for over 25 years, so he's pretty good at it. Put him on Reddums the Feerless Attack War Pony, and they make a pretty good pair.

The key in the mounted combat is to have a quick, maneuverable horse that isn't afraid of others. Red's small size and nimbleness means that he can almost dance around the big draft horses while hubby clobbers their riders. He can zip in, deliver a hit, and be gone super-quick. And the fact that Reddums is Head Pasture Boss means that he will cheerfully mow down a horse that's three hands higher than him, ears pinned to show them who's boss. You can practically see the little bubble above his head that says, "GET 'EM, Dad, GET 'EM!!!!" as he zooms from horse to horse.

Reddums takes on a 17+hh Belgian and wins! Photo courtesy of AzulOx photography.


And in this particular melee, they were unbeatable! Reddums was the last one standing after about ten minutes of hard combat. Cash did pretty well too, since he's super-maneuverable, but he's not as willing to engage as Red and his rider doesn't have as much combat experience. 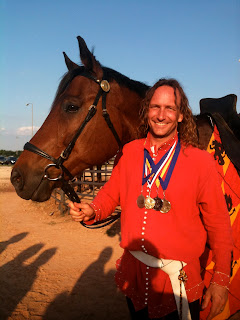 
More pictures as I get them. For now, it's good to be home with nothing planned on the horizon. Well, except for possibly a dressage show on the 27th, and a joust practice June 9th... and kiddo #2's high school graduation in between!
Posted by jenj at 10:09 PM