I think I left off last Thursday, when we were still one day out from the start of the tournament. Whew, it's been a long couple of days, with no Internet access and not enough sleep for anyone. It was fun, but I'm pretty glad it's over.

Thursday night was another official jousting practice. Hubby was not riding, as he had done a practice earlier in the day. I headed out to help after work, but didn't get a lot of pictures. Red was the demo pony for the final mounted combat class, and ended up spending most of his time pretending to be a couch while other riders rode past and practiced their maneuvers against his rider. 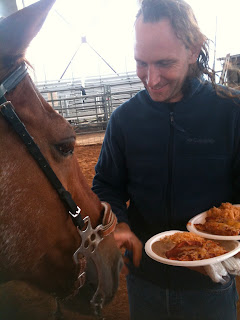 Afterwards, Red tried to further his couch-potato-ness by eating our dinners.

After dinner, we helped with the jousting practice, handling lances, holding ponies, and providing water to the jousters. It really does take an army of ground crew to make a joust work!

About halfway through the practice, we started to see lightning quite close, and hear thunder. Riders were told to dismount, and that practice was being canceled due to the weather. Someone checked the forecast on their cell phone, and discovered we were under a tornado watch. They announced over the loudspeakers that we were to take shelter in the cement-block bathrooms if the tornado sirens went off, or if we heard a noise like a train. So much for an uneventful practice!

We began to help the jousters disarm and get them off their horses, when suddenly the wind picked up and rain started coming in sideways through the covered arena. The wind began howling, and the solid panel jousting lane started coming down in the wind. We quickly got the remaining riders off their horses, as the thunder built and the lightning came down so quickly the sky was nearly daylit. At this point, the wind and the driving rain were so loud we were screaming at one another just to be heard, even though we were standing quite close.

I began to worry about the temporary stabling - a huge tent with temporary stalls in it - that housed most of the jousting horses. I went over to ask the event organizer if we should think about evacuating the horses out of the  in the case of an actual tornado, or if it looked like the tent was going to come down. I had just shouted my question when I saw a tide of people running from the other side of the arena toward the bathrooms, screaming "TORNADO!!!!!"

What to do? There were a bunch of people running for shelter, and others standing there holding horses by the reins with no idea of where to put them. I did the only thing I could think of, and started yelling at people to pull their horse's bridles off and turn them loose, then get to shelter. I think I pulled five or six bridles off of horses that had been left by their handlers, and pulled several others off of horses whose owners would not leave them. I would have stayed longer, but someone grabbed me by the arm and told me to get out, so I did.

I was almost doubled over as I tried to run across the walkway from the arena to the bathrooms, the wind almost slamming me off my feet and the rain hitting me so hard I had red welts on my face afterward. I arrived, soaked and out of breath, to find a bunch of people already in the shelters. I passed out the three bridles I was holding (I didn't even have any clue which horses I'd taken them off of), then stuck my nose out the door to see how the arena and tent were fairing. There were still a few people in the arena stripping tack off of horses, and I felt really bad that I had left them. I watched the tent closely and realized that it was hanging on pretty precariously. A couple more people arrived, and I asked if they knew anything about the tent. They said that some folks were pulling horses out because it looked like it was going to go.

I was not about to leave our four horses in a tent that was coming down, so I took a deep breath and ran  over to the tent. That's when I discovered that my muck boots had sprung not one, but three leaks! Talk about sucky timing. Soaked socks notwithstanding, I arrived to find almost all the horses had already been evacuated to the arena, except our four and a couple more. I have never in my life been so glad that I leave halters with leads on the stall doors, and we were able to quickly halter them and get them out. Another horse we pulled out with a rope around its neck, because we couldn't find its halter. We turned everyone loose in the arena and then went for more. We found a couple of panicked horses in outside pens and brought them in too... and then took a moment to breathe.

The arena was wet and slick. There were almost 60 soggy, spooked horses wandering around, safe but looking rather worse for the wear. We were soaked through to the skin and shivering. I had about two inches of water in my boots, which handily drained out with every step. But... nobody had been hurt, and all the horses were fine. We huddled together for a few minutes on the lee side of the arena, and then the storm began to abate.

People began to leave the shelters as the wind died down. The task became separating horses out, finding halters and leads, and figuring out who belonged to whom. Our four were hanging out in a cute little herd, with Red, Saga, and Taran protecting Cash from anyone who came near. I eventually found my hubby and we caught our guys, then stood for a while and waited for the rain to stop. 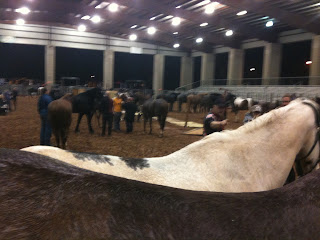 Soggy but safe.  Sorry about the photo quality - my iPhone was soaked in my back pocket. It actually had some issues working for a couple of hours, until it dried out some. 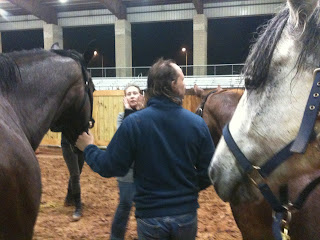 The temporary stabling actually survived, although all of the stalls except for the middle ones were inches deep in water, as were the aisles. Most of the horses (including ours) spent the night standing in soaked shavings, because there was nowhere else to put them and no way to replace the shavings at that hour. A few folks who were camping lost their tents, but several kind souls invited them to stay in their hotel rooms, so everyone had a dry place to sleep. I was lucky to have a dry change of clothing in our camper, which I put on before driving home (I did have to wring my socks out when I finally peeled them off). Hubby stayed on site in the camper, but luckily it was just a gentle rain the rest of the night.

I found out the next morning that there wasn't actually a tornado anywhere in the area - someone thought they had heard a tornado siren, and panicked. So while technically all the excitement was for nothing, I'm glad it happened the way it did and we got the horses to a safe(r) place.

Besides, there's nothing like a little Texas storm to kick of a weekend of jousting!
Posted by jenj at 10:12 PM