Enough with the short jokes already

Ok, I get it. Red is 14.2. If he were a reining or Western pleasure horse, he’d be average sized. But when you do stuff like foxhunting, eventing, and dressage (ok, and jousting too), he’s kind of a midget. But dangit, he’s a CUTE midget, and he tries hard, and he’s a really good boy (most of the time).

And it may not have occurred to everyone out there, but we’ve owned Red for 8 years, and WE KNOW HE’S SHORT. Duh.

Case in point. We were foxhunting last weekend, and as we were riding back to the trailers, and one of the other riders says to me (from the top of her 16.2 hh ex-TB racehorse), “Is that what you’re down to?” I get that you’re trying to be funny, but really. Red had been rateable, polite, and spent the entire hunt right behind the second flight leader. If you have that kind of hunt horse, who CARES how tall he is?

And the new riding instructor – I know that he wants me to have something larger with a regular WTC, but if he says “We need to find you a REAL horse!” one more time, I swear Red’s gonna run him over. I mean heck, if he can face down an 18hh draft while jousting or doing mounted combat, some guy on the ground shouldn't be any problem, right?

Yes, I get that he’s gaited, and that his canter is flat and lateral and sometimes unbalanced. I know he’s not super fast, and he cannot jump super high. You’re right, I’ll never be able to take him to a dressage show (even though his trot work is starting to be first level quality) and we’d probably get thrown out of even the Green as Grass division if he foxtrots in the dressage test. But he’s one HELL of a nicer ride than the Hanoverian mare that I was offered to ride the other day – the one who kept trying to spin and bolt to the gate with me? That was super awesome. MY short little gaited pony moves off my leg, is soft in the bridle, jumps 3’ coops, and kicks draft butt.

Did I mention that he cuts cows too? Who knew?

So next time you see me out there making the best of what I have to ride (because, you know, I have one retired horse, I put my main horse down last week and my hubby rides our other horse), how about mentioning how nice his trot work is, or how brave he is over the hunt coops, or how great it was that he cut the cattle away from the horses who were freaking out about them? Save the short comments for someone who hasn’t heard them. Besides, I’m riding the Feerless War Pony… what’s under YOUR saddle? ;) 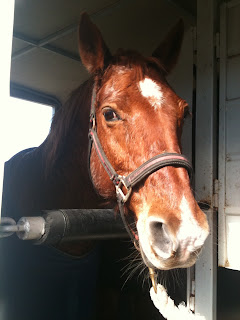