First project of the new year - the kitchen sink!

Our house boasts the original enameled cast-iron kitchen sink and bathtub.  While enamel is one of the most long-lived surfaces for such items, it does eventually get scratched and lose its polish. There are about a million Google search results for how to re-enamel an enamel tub (this involves using enamel paint over the existing finish), but unfortunately the previous owners of our house apparently didn't do their homework before slapping on a coat of (some sort of) paint over the sink and tub. 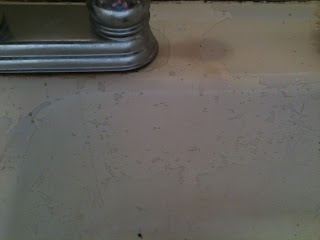 You can see the paint flaking off, and the original enamel finish underneath it. 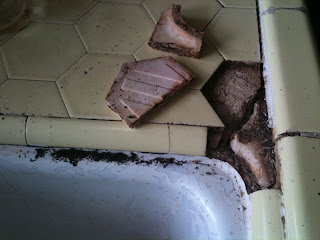 In addition, years of being wet caused some of the grout on the edge of the sink to fail, loosening some of the tiles. 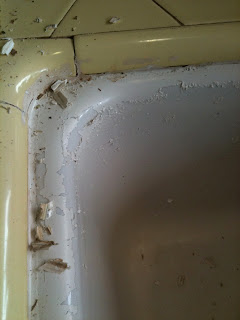 We started the project by removing as much old caulk and grout from around the edge of the sink. A utility knife and a window scraper (straight razor blade) worked well for this job. 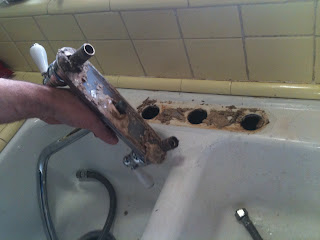 Next, we pulled out the (old, disgusting, loose) faucet. We considered replacing it, but couldn't find any faucets that would look nice in a 50's farmhouse kitchen, AND didn't cost an arm and a leg, so we just cleaned this one and replaced it. 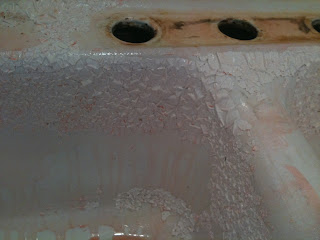 Next, we used Orange paint stripper to remove all the paint on the sink. You can see here how it made the paint loosen and bubble up.

We chose this stripper because it's fairly mild, and we didn't want to damage the underlying enamel any more than it had already been damaged. We tested a small section to be sure it wouldn't stain or damage the enamel first, and then went to town. (P.S. wear gloves when you use this stuff. It's not as toxic as some but it's not something you want to get on your skin.)

After scraping off all the paint and orange goo,we wiped everything down with odorless mineral spirits (again, wear gloves!) and began reassembling things. 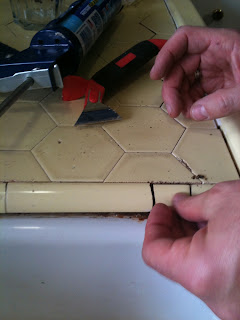 We used an adhesive caulk to stick the tiles back in place. 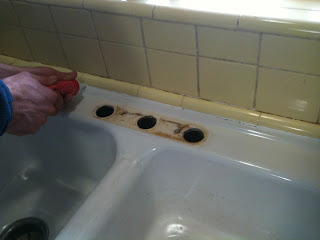 We caulked the rest of the sink with a tub and tile caulk. Hubby applies the caulking; my job is to go behind with the "magic caulk finger" and make everything neat. I advise using gloves and lots of water and paper towels.

After the caulk had dried for about two hours, we reinstalled the faucet. Then we went over any grout lines on the tiles with a sanded caulk - it looks like grout but works like caulking. A lot of the grout really needs to be replaced entirely because it's gotten flaky and "rotten", but without scraping it all out (and risk damaging the tiles), using the sanded caulk was the best we could do. 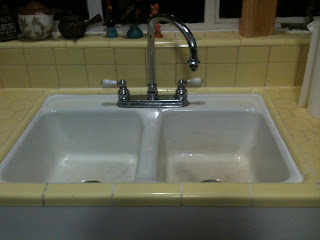 Ta-dah! The "new" kitchen sink! I still need to clean the grout on the backsplash and scrub some stains on the old enamel, but it looks about a million times better!

We had originally planned to refinish the sink "properly" with enamel paint, but it seems that even the best paint jobs (done by pros, using spray enamel) only last 3-5 years. After stripping the paint off the sink, we decided that the original enamel really isn't that bad - sure, it doesn't have it's original shine, but it looks like what it is - and antique farmhouse sink. We're good with that. :)