In memory of Saga

How do you start a post like this? The blank screen gives no clues. Everything I think of sounds like something out of a newspaper obituary.

We'll start with yesterday. It sucked. People kept telling me it was such a hard decision I was making, but it was actually easy. Saga was in pain, and there was no way to fix it. The kindest thing to do was to let him go. Acting on such a decision - making all the arrangements for both Cash and Saga - was surprisingly difficult. Having to tell the vet, the BO, my friends, over and over again what was going on - at work, no less - had me going through Kleenex after Kleenex. Telling everyone who had known Saga what was about to happen, just in case they wanted to say goodbye, was also hard. Writing yesterday's blog post was hard. I cried a lot of tears and went to bed early. Luckily, I slept the night through.

This morning, Fuzzypony took off work (bless her, I have the best friends in the whole wide world) and drove with me to get the boys from the retirement farm. We pulled in and went to get the boys. It was perhaps 300 yards from where Saga and Cash were out in their pasture to the trailer, and more than once I though we weren't going to make it. Saga would take about 10 steps and then need to rest, he was hurting so badly. I wished like anything I had something, ANYTHING to make him feel better, make the trip easier, but I didn't. Cash was the best, he stayed right next to Saga the entire time, with no halter or lead on him. If he got a few steps ahead, he stopped and waited for Saga. I was crying so hard I could barely see the ground in front of me, but seeing how much he hurt, seeing how bad it really was, made me realize again just how much I was doing the right thing.

By the time we got to the trailer, Saga was shaking and practically on three legs. I hadn't thought to bring standing wraps or any other support (apparently I wasn't thinking very straight at all), but we did blanket them for the trailer ride. We loaded Cash first to give Saga a break, and an extra incentive to get on the trailer. He had a bit of a hard time loading, but got on after a moment.

I drove slowly and carefully home, trying not to jostle the boys any more than necessary. We turned the trailer around, and with the truck still running, unloaded Cash and handed him to MC, who had taken the morning off work (bless her too, did I mention I have the best friends ever?) to pony-sit him while Saga was gone. Before they could start hollering to each other, Fuzzypony and I hopped back in the truck and left for the vet. It was the easiest way I could think of to separate them. I hope Cash forgives me for doing it like that, but how do you tell a horse that he'll never see his best friend again, and to say goodbye?

When we pulled into the vet, the tech that met our trailer was crying. My vet was sniffling too. We put Saga in a stall with some alfalfa, and I said my goodbyes to him. He was content, munching his alfalfa and watching the cows in the adjacent pasture. I'm not sure if he understood what was going on, but he was relaxed at at peace.

I've never had to put a horse down, and it was mercifully quick. He was literally standing there eating a carrot one moment, and gone mid-bite. I held his head and stroked him and cried for a while, waiting until the vet said he was completely gone. And then... it was peaceful. He was peaceful.

My vet told me that when horses are ready to go, they tend to go very quickly. Saga was one of the fastest she's seen. I never doubted that this was the right decision, but I'm glad that he was ready too.

It was good that MC was able to be with Cash when we dropped him off at home. She took him for a walk immediately after he got off the trailer, and he was good, but after they got back to the barn he was frantic, screaming for his buddy. I have no doubt he would have hurt himself if she had not been here, and I cannot thank her enough for keeping him sane when he was initially separated from Saga. This evening he was still pacing, but has started to eat a bit, and isn't frantic. Red is up in the stall to keep him company tonight - not that he's any substitution for Saga, but some company is better than none.

I talked to Cash tonight about Saga. I explained that he was free now, but he wouldn't be coming back. Cash let me rub his face and ears a bit in between his pacing. I told him that Saga had been a really good friend, and that it was OK to miss him, and that I would miss him a lot too. I wanted to hug Cash's neck and cry into his mane, but Cash has never been that type of horse, so I contented myself with a gentle ear rub. I fed him the half of the carrot that Saga didn't get to eat, with tears streaming down my face.

I brought my camera with me today, intending to take a few pictures, but I didn't take any at all. I realized that I didn't want to remember him on his last day, but instead I wanted to remember him on his best days. So I went back to the blog that I started, Saga Chronicles (it predates this blog, if you're really bored you can go read how we got started) and found some of my favorite pictures of him. This is how I will always think of him. 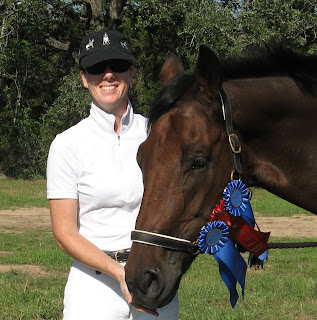 Our first show together. 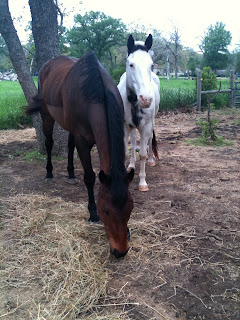 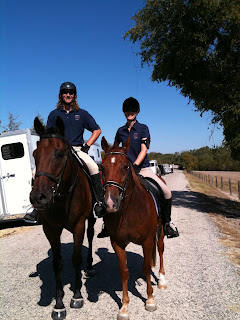 Our last show together.

That last picture, with him fit and sound and having just won the Ex-racehorse award? That's what I want to remember. The partnership, the teamwork. Mr. Tall, Dark, and Handsome.

Rest in peace, my beautiful boy. You will be missed.