Starting to move on

Today was a good day. Not the best day ever, but I'm at peace. Looking back, it seems like I've known that yesterday was coming almost since the beginning of this injury. I feel closure now, and relief that Saga isn't in any more pain.

Thank you everyone for your wonderful, kind words. I haven't met most of you in person, but it's amazing how supportive the blogging community is. I apologize for not replying to your comments individually, but I don't have anything to say other than Thank You. Y'all are wonderful!

Cash is starting to settle in without Saga, although he refuses to eat much at mealtimes. For now he's separated from the others, so I can leave his food out for him to eat when he likes, and he has been finishing it in his own time. Whatever he wants to do is fine with me, as long as he keeps himself healthy.

My vet had asked if she could perform a necropsy on Saga's leg, and I gave her permission. I got the report today:

"Everything that we were starting to see on last radiographs with the cyst like lesions were real. There were two areas of cartilage damage within the joint with corresponding cysts that were breaking into the joint surface  The area would absolutely not be accessible arthroscopically.  The corresponding soft tissue structures were normal, with the exception of a very thickened joint capsule due to chronicity (that is what you were seeing get so big on the outside of the joint).  Also on radiographs, the joint was starting to show additional signs of arthritis."


I called her for an explanation in English further details. The bone cysts (there were two) were 5+ mm long, which is pretty big considering the location, and they were still active (getting bigger). They were in the middle of the joint area on the pastern bone, and would not have been accessible by surgery if we had wanted to try that option. In addition, the cysts were "breaking into the joint surface," causing massive swelling. There was also bruising on the bone itself, and my vet feels like they would see even more damage with an MRI. Basically, there was nothing anyone could have done to help him. I never had any doubt and did not need this confirmation that we made the right decision, but it is beyond doubt now. My only regret is that we let him go on as long as we did.

But Maddy and Artemis... they made me smile today. :) 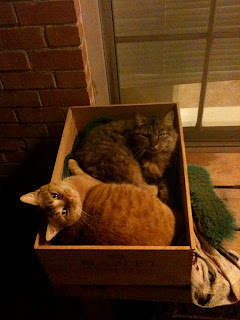 Cats! In a box! How can you not love such cuteness?
Posted by jenj at 8:02 PM