Before we got him, Brego had a cracked tooth that turned into an abscess that ended up as a sinus infection that he had to have flap surgery to clear out. The story is here, if you want to read it. We kept up with his every-six-months visits to a specialist equine dentist, so we were surprised to see him quidding hay early this fall. We had the dentist out immediately, since we were quite concerned that Brego might lose a pound or two if he didn't have his full chomping capabilities.

As it turned out, the tooth next to the one he had removed had cracked and was causing him some discomfort. We found a second surprise when we took x-rays to try to see how extensive the crack was: Brego had a mass in his skull, at the site of the old abscess. 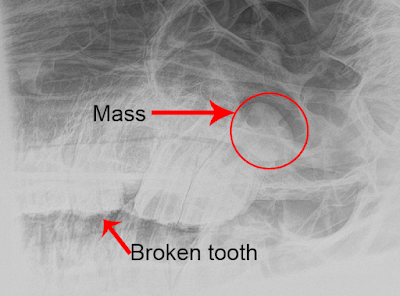 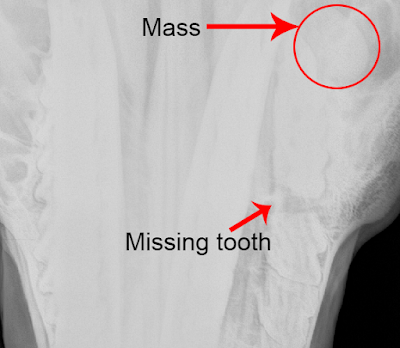 The radiographs were sent off for a secondary consultation, and the results were mixed. The consensus was that the mass was not an immediate threat, and had likely developed after the flap surgery. However, if we tried to remove the tooth, there was a good possibility that the process would disturb the mass, which could cause significant problems and a potentially even a follow-up surgery to remove it. Our dentist recommended taking Brego for a standing MRI before we attempted to remove the tooth so that he would be able to plan the surgery around the mass, or plan to remove the mass as part of the surgery if necessary.

There was, however, a second option. Apparently, up to about Brego's age, horses are able to lay down enamel over broken or chipped teeth. We could give it a month or two and wait to see if he might be able to repair the damage enough to keep the tooth. We agreed that this would be the preferred option, so our vet showed us how to do daily "tap tests" and "breath tests" to make sure there was no sign of infection (horse heads should sound hollow when tapped, and their breath shouldn't smell like something died). We opted for this option, since it seemed like the best and safest for everyone. Brego didn't quite understand the tap tests, although he did appreciate the daily cookie he got after Hubby thumped his skull every morning.

Last week when we had the vet out to look at Paddy, we also checked up on Brego. BEST NEWS EVER - he managed to lay down enough enamel to keep the tooth! You can see that it's broken off just below the gumline, but there's no redness or swelling, and there's also no sign of pain. 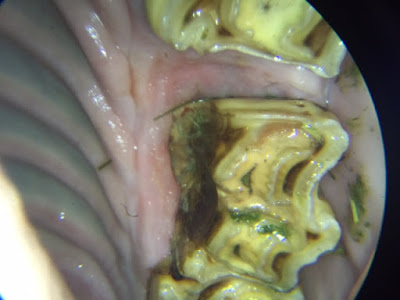 The inside 1/3 of the tooth is broken off just below the gumline - but it's looking great!

We'll continue to keep an eye on it, but hopefully Brego will stop eating rocks or whatever he's snacking on between meals, and we won't have any more dental fun.