Your chance to be an armchair vet: What's wrong with Paddy?

Let me preface this all by saying that the vet has already been called and will be out Wednesday, so please don't worry that I'm using the Internet to diagnose my beloved Paddykins (also, Aimee would murder me in my sleep). So we'll get to the bottom of this with actual technology an' stuff. But in the meantime, it's fun to play armchair vet in this week's edition of "What's wrong with my horse?" 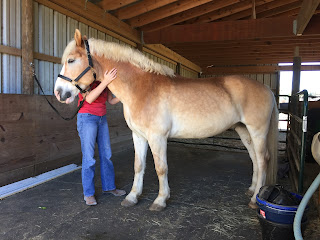 Here's a few things that keep coming to mind:
And also:
Soo, what does the Internet Armchair Vet Symposium think? Have you ever had anything like this in a horse of yours?
Posted by jenj at 3:08 PM