Really not the news I was hoping for

The vet finally made it out to see Paddy today. I need to have my armchair vet license revoked because he's lame on the RF, not the LF. In fact, he blocked exactly the same way he blocked 18 months ago when he had a soft tissue injure in that foot. We don't know exactly what it was that he injured or how badly, but right now the assumption is that he re-injured whatever it was.

My vet would like to do an MRI, and I would too, mostly to see exactly where the problem is and just how bad it is because that might give us some idea of long-term prognosis. However, nobody can accurately predict the future, so even if he has a giant tear somewhere for the second time, it's possible that he could come back 100% and as long as I keep him on good footing, he's sound for the rest of his life. Or he might never be sound again. Who knows, it's a crap shoot either way.

So, you guys know the drill for soft tissue injuries. A month off with limited turnout, a month of tack walking once he's sound at the walk, then work him back up. Three months minimum, all the while desperately crossing your fingers that he doesn't re-injure it. Then waiting each ride to see if he'll hold up or not. 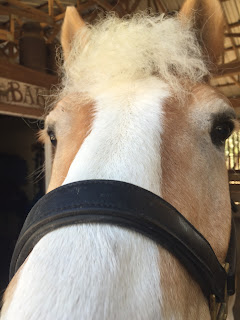 Don't worry, he still gets most of the cookies.

On the bright side, I have a Brego to ride. I'm really looking forward to it, although I could wish it was under different circumstances. He's very talented and has a ton of training, I'm just going to have to remind him of that. Our first lesson is tonight, and I expect to be doing lots of energizing walk-trot transitions (thanks, Megan!)
Posted by jenj at 3:27 PM