You might have noticed a lack of updates about Paddykins' thrush-based lameness. That's because I had a "yay, all better!" post all ready to go, after we'd had a great dressage ride on Thursday and a fantastic trail ride with hubby on Saturday.

Then Sunday, he was lame. This time on the left front - and it's an altogether different kind of lame that the thrush problem.  He's mostly fine on straightaways, but struggles badly on turns, and positively refuses to trot. I suspect soft tissue injury in the foot, because it's very similar to how his other S/T foot injury (on his RF) presented 18 months ago. There's no heat or swelling anywhere, but something is most definitely not right. The vet was due out yesterday, but had to reschedule for tomorrow.  In the meantime, Paddy's been on stall rest and limited turnout. Fun times.

So there I was Sunday morning, watching my plans to move up to First any time soon dissolve before my eyes. And then I realized... hey, we do actually have another really talented dressage horse, just standing around eating ('cause hubby has been gone so much this fall). Before poor Brego quite realized what had happened, I'd groomed him, tacked him, and we were on our way for a little spin.

It's the first time I've ridden Brego since we tried him out in August 2014. To say he's a bit different than Paddy would be the understatement of the year. Paddy's like riding shotgun (and therefore hanging on for dear life) in an Audi Quattro rally car, where the driver is a kid who is doing donuts at 100 mph in the parking lot but really questions why you have to practice this boring stuff. Brego's more like piloting a Sherman Tank, where you're the cocky (yet apparently clueless) gung-ho new guy and the rest of the crew has 10+ years of experience and 187 medals among them, and would really rather be sitting around eating Cheetos and telling stories.

Me: Hey, big guy, how about we trot?
Brego: *stuffs Cheeto in mouth and starts licking cheese dust off fingers* Huh?
Me: Trot?
Brego: *sighs* I remember back in Massachusetts, we were off on a hunt and trotted for TWO WHOLE MINUTES.
Me: TROT!
Brego: OK, OK, just a sec... jeez, don't get your panties in a wad about it. I swear. *shakes head and rolls eyes* 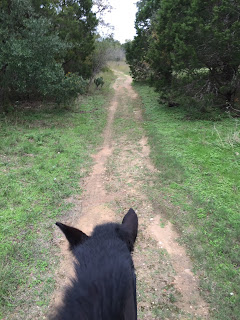 Of course, once you get Brego going, he's a total dreamboat to ride. Those years of experience and 187 medals come is really handy... it's just that getting him to dust all that knowledge off and motivating him to use it is a little... exhausting.

(Hey Megan, you know those walk/trot transitions for a lazy horse that you talked about? Yep, we're on it.)

Oh and also, I'm having to re-learn how to ride. Because Brego's movement is so big compared to Paddy's, he's throwing me around. I feel like a total noob. However, it's really amazing to ride an actual balanced canter.

So, since hubby stole my horse for two jousts this summer, I'm stealing his horse for the foreseeable future. Poor Brego, he's got no idea.
Posted by jenj at 9:45 AM