On the way into work this morning, I got a call from the hubby. This is a fairly common occurrence, since I often forget things at home and he calls to remind me.

"Hi sweetie, what did I forget?" I answered the phone.

Pause. My brain is wondering how many pounds of steak-on-the-hoof is equal to one bull, and what are the laws of ownership if an animal wanders onto your property, and then I realize...

Hm. Neither of us have any experience handling cattle from the ground although we've both worked them from horseback before. But bulls can be dangerous, and this one...

"He's got horns... pretty big horns," my husband informs me.

Hm. Bull with horns. Skip the steaks... well, darn! What do we do now? And more importantly...

I mean, we don't exactly live in the country. We've got 70 acres of greenbelt behind us, sure, and all of our neighbors have 2-10 acres, but still... there's a Barnes and Noble walking distance from the house. And a busy highway, for heaven's sakes! There are no farms with cows - much less bulls - anywhere nearby!

"No idea," responds the hubby, "but I'm going to call the city."

Never mind that it's 7:20 a.m. on a Monday and nobody but nobody is going to be in that early. But I dutifully hang up so he can call.

About five minutes later, the hubby calls me back.

"The sheriff is on the way," he says, "and they've been looking for the bull for a week and a half."

"Oh, and they knew who I was when I called," he continued. "I told them I was the resident at 762 Oakdale, and the guy on the other end responded, 'Hi Sean'".

Returning back to idea that the sheriff was on his way. "Um, so honey, what are they going to do, handcuff the bull and stuff him in the backseat of the sheriff's car?" I asked.

My husband laughed. "No idea," he replied, "but I told them which way he ran. I've gotta head in to work but I sure hope they catch him!" 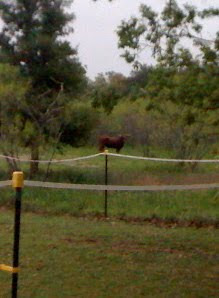 You knew this post would include a suspect picture, like one where the photographer swears it's a photo of Sasquatch or the Loch Ness Monster. Well, my husband swears there was a cow just beyond our back fence, and here's the photographic evidence. No bull!
So, how was your Monday morning? Anything exciting happen?
Posted by jenj at 8:50 PM