We have this really scary, prehistoric-looking plant growing along our east fence line. 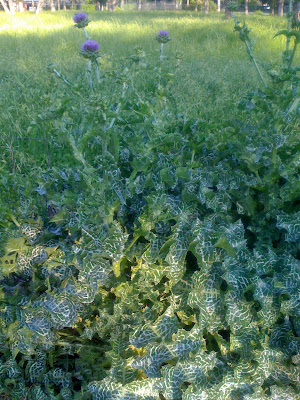 This plant is not a friendly-looking thing.

The thing is, I kid you not, about five feet tall. The leaves are about two feet long, variegated, and covered in thorns. 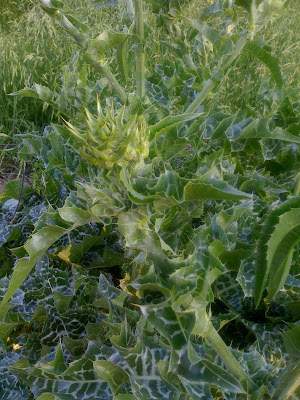 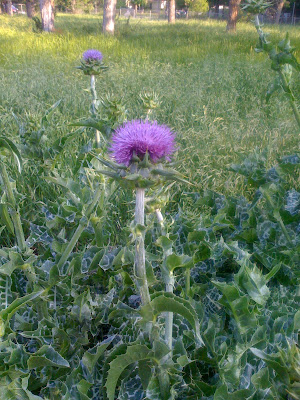 The flower is pretty, but YIKES! Do you see those spines???
Turns out, it's a Milk Thistle, an invasive from the Mediterranean area. Apparently it's got medicinal properties and is used to treat liver damage. Be that as it may, it's just... nasty-looking... and nobody around here has any liver problems.

Since the last thing I want is dozens of these giant things all over the yard next year, I put on some long sleeves, got out my heaviest gloves, and went to work on it. First, I chopped off the flowers to prevent it from going to seed. I discovered the hard way that you have to be super-careful handling any of the plant, because those spines will go right through gloves. Ouch! Eventually I chopped enough of it back so that I could see the base of the plants, and then I took a shovel and cut it off at the base (no way was I going to reach under it to get to the base, and besides, none of my clippers could get around the 5 inch stems!).

So now I have a big mound of thistle parts in my front yard. I'll probably take them to the dump later this week since I don't have any lawn bags to stuff it in, and frankly, the only safe way to handle this plant is with a shovel. I still have to dig up the roots on the plants so that they're really dead and don't come back, but I think I got them before they went to seed and so hopefully I won't have to deal with them again next year. Which is a Good Thing, because those thistles are just nasty!
Posted by jenj at 8:04 PM