About two months ago, we bought a new stove - a GE Profile Double Oven Gas Convection Oven, to be precise. 5 burners, double convection ovens, and it makes coffee too (ok, kidding on the coffee). Unfortunately, the house didn't actually have gas run to the kitchen when we bought it, so the oven has been sitting in the living room since we purchased it. Poor stove, neglected and abandoned. And me, stuck with the crappy electric stove with the Carbonizing Oven. Tragedy.

However, this last week, our plumber finally managed to find time in his schedule to run a gas line from the utility room to the kitchen. Of course, first we had to submit a sketch of the new line, along with $100 permit fee, to the city office for approval. Once we got the approval, work started. 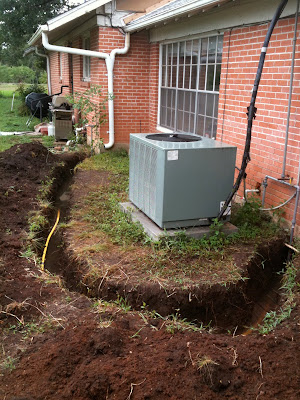 Digging the trench from the laundry room (on the right) to the kitchen (on the left). We paid the plumber's son to do this part. 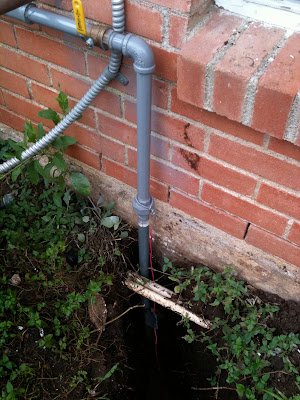 Tying into the existing gas line into the laundry room. Note the shiny new cutoff valve (yellow). The red wire is a tracer wire that is run next to the gas line - you can plug it in and then trace it with anything that detects electricity. This is important since gas lines are no longer metal, but a super-strong plastic. The white PVC pipes we think are water pipes that go to the shed, but we're not entirely sure. 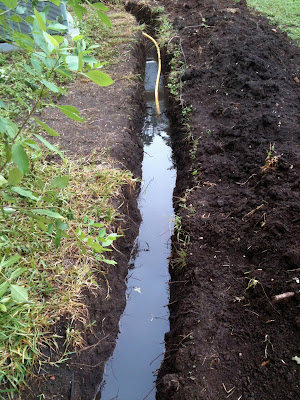 And of course, halfway through the project, it rained and the trench filled with water. The yellow thing in the trench is the new gas line. 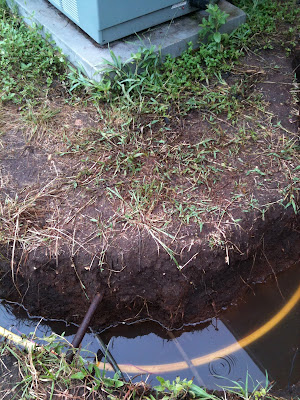 This picture is actually fairly important because you can see three other metal pipes above the gas line. We think the two lower pipes are gas and the upper one is water, but we're not really sure where they're going or what they're hooked in to. However, for future reference, we'll know where to start looking with a metal detector to trace them out. 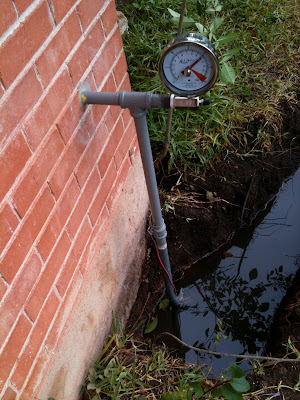 Nearly done - the line is pressurized and holding steady, as shown by the gauge. At this point we had the inspection company come out to inspect it, and then backfilled the trench. But we couldn't actually install the new stove and hook it up until the inspectors did the final inspection... I almost couldn't stand the wait!!!

You're probably wondering why this is just like the Old Spice Commercial... well, you'll just have to wait around for Part II to find out!
Posted by jenj at 8:29 PM