Perhaps my earlier rant about the challenges of successfully ordering a French door that swings out instead of in moved something in the heavens, or maybe it's just that we were finally doing business with a company that cared. Whatever, but when Lowe's screwed up our door order this week, they were extremely apologetic. So much so that they put our contractor in touch with the mill that makes their doors, which happens to be about 15 minutes from our contractor's house. He went to the mill, watched them while they made the door, and then brought it to our house and installed it yesterday. 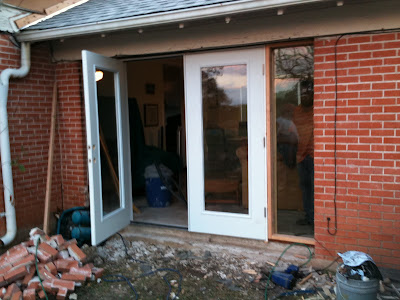 Look! A door!
And because this project is simply not meant to go as planned, as they were unloading the glass transom windows that go on either side of the door, one of the windows tapped the bumper of the truck and broke. Sigh. The new one should be in... you guessed it, next Wednesday. 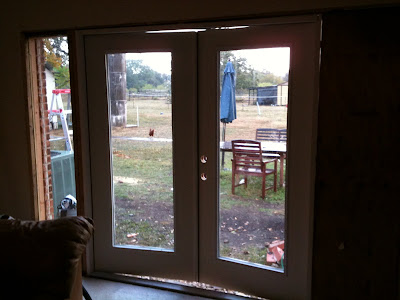 Until then, this is the new view from my living room. It's gonna look great!

Today our contractor comes back to put on doorknobs and do as much of the trimwork as possible without the second transom window. I'm bummed that he wasn't able to finish the job, but I'm really happy with the way it's going to look when it's done!
Posted by jenj at 8:28 AM