Not really what we had planned...

The second day of having Cash and Taran at the house started off well enough - we got everyone fed (a bit challenging) and everything mucked, then settled down to a nice Easter breakfast. Red got to stay in the stall while Saga, Cash, and Taran shared snacking space, which they did very nicely.

After breakfast, we opened the east front pasture and the track, and let all the boys out to mingle. 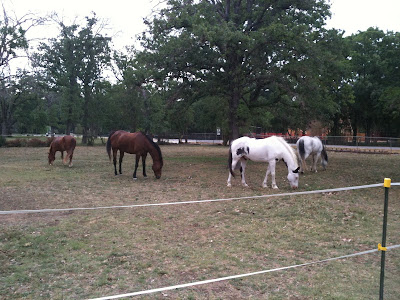 Ah, domestic tranquility...
It went really well for a while - although Red at one point pinned Cash against the fence like a cutting horse pins a cow (seriously! Maybe he thinks Cash is a cow?) nobody was hurt and Red backed off when I yelled at him. The boys calmly grazed while we working on building more permanent, bale-sized slow feeders (as filling haynets 4x day becomes a PITA) and finished up the stall mats in the barn aisle. 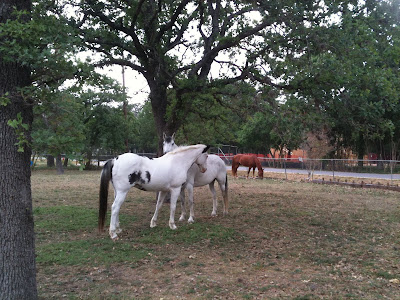 Mutual grooming! I have NEVER seen Cash do this with another horse, EVER, but he and Taran seem to get along perfectly.
The hubby went off to work on his jousting armor, and Fuzzypony, MC, and I had a snack and a glass of water before heading out to ride. We were sitting in the family room watching Taran buck and run on the track, just generally having a good time, when disaster struck.

None of the other horses were anywhere near him, but somehow in the middle of a buck, he got his hind feet OVER the back perimeter fence. A brief scramble ensued, and before we knew it, Taran was on the outside of the fence in the green space behind our house. It was one of those complete OH SHIT moments - it could not have taken more than a second or two, but there he was. We all grabbed our shoes and sprinted in different directions - me to head him off in case he got around to the street, MC to grab a halter, and Fuzzypony to grab a bucket of treats.

We are so, SO lucky that we not only saw it happen but that there were three of us there to handle it. Taran was caught quickly, thanks to the bucket of treats, and didn't make it to the street. Unfortunately, he managed to cut his right hind pretty badly on the predator fencing, and had several other scrapes and lacerations. We hosed him off and called the vet once we'd gotten a closer look - we figured the cut on his hind at least would need stitching.

The vet (BLESS emergency vet calls!) arrived within 30 minutes. Taran had started off rather shocky - he was blowing and sweating, so we hosed him and his cuts while we waited. He calmed down quickly but then didn't want to put weight on the right hind, which is never a good sign. The vet, Dr. Wilson (who, for all that she looked like she just got out of high school, was competent, quick, and had a great manner with both Taran and Fuzzypony) gave Taran Banamine and Rompum, shaved the cuts, numbed the area, and put in 5 very neat stitches. The cut itself wasn't deep and thank goodness it wasn't up any closer to the hock, but it was just a skin wound. 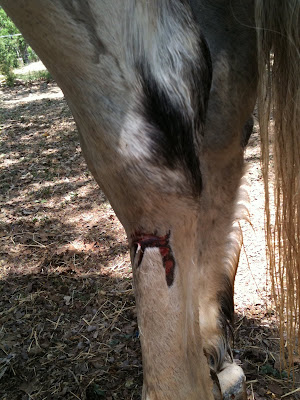 Left hind - looks icky, but it's just hair and a little skin. 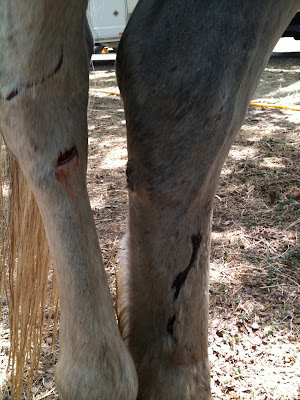 Right hind - not so good. That's the one that got stitches.
Considering how bad that could have been, Taran was very, very lucky. He's on 2 days of stall rest followed by up to 12 days of quiet turnout in standing wraps, until the stitches come out. By nighttime he was fine - walked normal, eating well, drinking well. Cash is in the barn with him, keeping him company (they are now pretty much inseparable), and they will go out together later in the week.

Red continues to try to savage Cash over the fence. Red is not playing - this is serious stuff. I'm not sure what's going on - maybe he thinks Cash is a threat to his buddy-buddy with Saga? Saga and Cash are getting along great - we fed them together this morning and last night, and they politely shared alfalfa. Taran is sharing his haynet with Cash too, over the stall door. Now if we can just get Red to agree to the new world order, all will be well.

Cash is also very concerned about the buckskin that lives two doors down. He keeps standing in the corner of the barn turnout and calling. And calling. And calling some more. Maybe he thinks that it's his buddy Bandit from Paint Creek? I don't know. I've told him that it's ok, but I don't think he believes me. Maybe I should take him over to meet the little guy so he knows it's not his friend, but still... he spent so much time standing there last night that he didn't drink much, and still had most of his hay this morning. Sigh.

I would like a return to peace and domestic tranquility, please.
Posted by jenj at 10:58 AM