Today, MC came over early to get in a ride before it got too hot. She took Reddums and I rode Taran over to the old arena for a nice workout.

I actually think I had the best ride on Taran that I've ever had! He was quite balanced right-to-left, got his canter leads the first time every time both directions, and his canter work is starting to be more through his back. Overall he really felt quite strong and balanced in his body, which is a huge improvement. Personally, I think it's being out on the track - even though he's not getting worked a lot, he's getting more movement than he's had in ages, and I really think it's helping him. 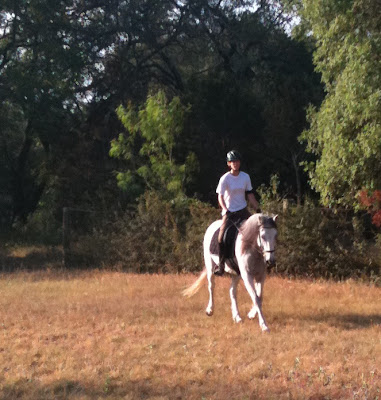 Looking quite pleasant at the trot.
Taran's biggest issue is coming into the bit over his back, instead of just bending at the pole. He can create a "fake" headset very well, so you really have to ride his back much more than some of my other horses. I was pleased to see in the pictures that MC took of us that his neck was out and longer than it sometimes is, and that he was stepping more underneath himself. 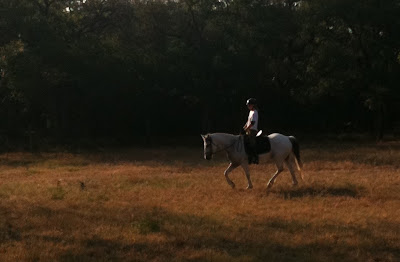 Relaxed but stepping through. 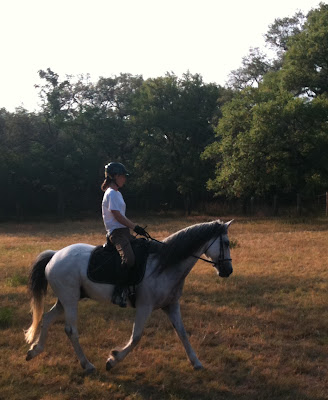 A bit unbalanced here, but nicely forward and his nose is in front of the vertical without having lost contact. I'll take it!
If the canter wasn't fantastic, there were moments where I could feel his back coming up under me. Awesome! 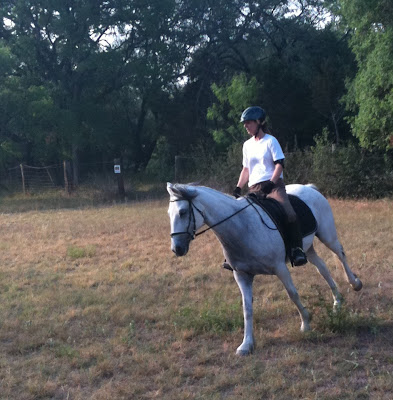 A giraffe moment, but he's not entirely upside-down. Even this is quite an improvement for Taran! 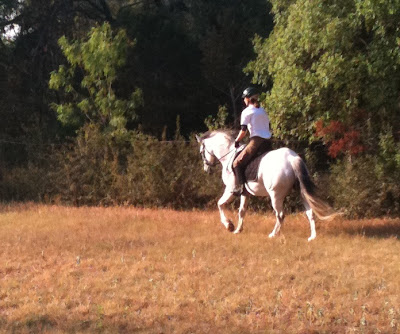 This was one of those golden "he's getting it!!!" moments, I think.
We did some transitions within the gait too, at least at the trot. I was very pleased to find him quite elastic and responsive, even if he wasn't coming through as much in the collected moments. It will come.

Now hopefully everyone kindly managed to ignore a) my impressive attire (yoga pants and my husband's t-shirt, anyone?) and b) my even more impressive equitation. I think it's past time to get back into some dressage lessons! Now if I could just find the time and the trainer...
Posted by jenj at 11:53 AM