A bit of dressage history

Several years ago, I was doing quite a lot of medieval reenactment with the Society for Creative Anachronism. It's sort of like Civil War reenactment only a couple hundred years earlier. Horses were allowed at events but due to insurance, we couldn't jump or joust (though we can now), and the "medieval games" that folks did on horseback weren't terribly challenging. At the time, Cash and I were doing quite a lot in the dressage arena, playing with things like canter half-passes and baby piaffe/passage steps (we never showed at that level, just schooled). One of the "rules" of the SCA is that you can do pretty much anything (legal) that you want, so long as you can document that it was done before 1603, the accepted "end" of the period reenacted in the SCA. So I began to try to document dressage in the late 16th century.

At first, the references were frustratingly vague. Most modern books on horses in the middle ages focus on the role horses played in warfare. But then I discovered a reference that mentioned that the King of France had a 'ballet du cheval' (literally, a ballet of horses) performed for his wedding festival in 1612 (this date varies depending on your source). More digging revealed that there was in fact a book that contained information about said ballet, published in 1626 and written by one Monsieur Antoine de Pluvinel, who just so happened to be the King's riding master. 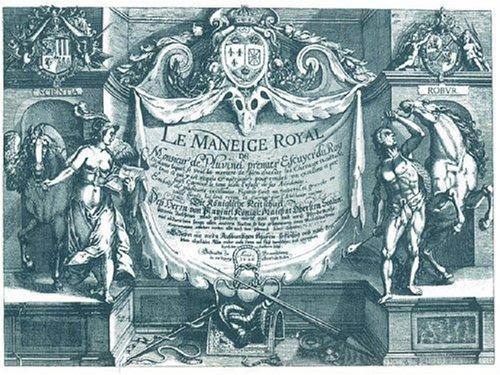 I managed to get my hands on a reprint of the original publication and lo, there in the back were not only woodcuts depicting the performance, but an actual description of the maneuvers performed by the riders. I expected it to be somewhat like the Spanish Riding School does today; instead, it's more of an English or Italian dance performed on horseback. Riders did things like take hands and turn around each other, shoulder-to-shoulder:

Still more digging, and I discovered that the sheet music they used for the original performance in 1612 still existed, and in fact had been performed by a modern orchestra. I purchased a copy of the CD (yeah, before iTunes, I know), curious to hear if the music matched the footfalls for a horse's walk, trot, and canter like we try to do in modern freestyle dressage. The music is very stately and processional - you can hear a sample of it here, on Amazon. I don't think it would ride well for W/T/C, but if you're doing airs above the ground, it might work.

Unfortunately, the 1612 ballet du cheval was slightly "out of period" for the SCA, so I wanted to find proof that ballets du cheval were being performed before then. Besides, how did we get from using horses for transportation and warfare to the fantastic maneuvers performed in the early 1600s? I'd always heard that the high school dressage maneuvers like levade, capriole, and courbette were developed as war maneuvers, but how did we know that? Where was the documentation? And so I started digging deeper...

Not to give away the gist of future installments on this topic, but this woodcut is from book published in 1556. Riding to music, anyone?
Posted by jenj at 8:35 PM