Tonight my saddle fitter, Carol Patty of Capstone Saddlery, came out to check saddle for the boys. Between Fuzzypony, MC, and of course my collection of saddles, we've got a ridiculous number of them overflowing our tackroom. I wanted to be sure we had the best-fitting saddle on each horse.

First up was Reddums. Fuzzypony wants to ride him while Taran's laid up, and she wanted to see if her saddle would fit since she's very fond of riding in it. With a bit of adjusting, it's going to work very well! It needs a bit of a shim in the front, so we have that on order, but otherwise it'll do just fine.

Cash was our next customer. MC wanted to see if her Benz and/or Neidersuss would fit, but unfortunately they were both too narrow. The County Eventer I have didn't work either, so it went off with Carol on consignment (Woohoo! One less saddle in the tackroom!). Saga's jumping saddle didn't work, but his RP dressage saddle was actually a nice fit. The 16.5 inch Wintec dressage saddle also worked fairly well, and we'll shim it a smidge in the middle. Cash has a super-short back so finding a saddle that doesn't bridge has always been a challenge, so I feel like we have two good options. 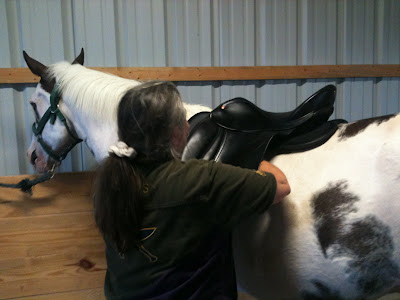 Carol tries the RP on Mr. Schpotty Horse.
Saga was actually super easy. Both his saddles fit just the way they are supposed to with no changes. YAY! We are going to order new "hockey pucks" for the RP since the velcro on one of them is failing, but otherwise everything is in good order. We tried a couple of other saddles on him too: 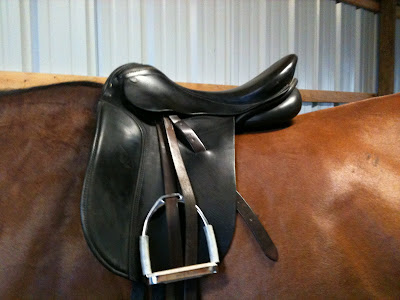 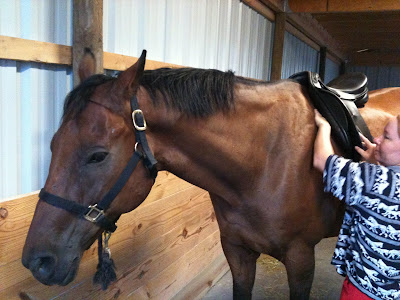 But he pinned his ears for the ones that didn't fit him. Clever boy!
In other news, TARAN IS COMING HOME SATURDAY!!!! He's doing great on 1 g Bute/day plus oral antibiotics, so hopefully the trend will continue at home. He'll still be off for at least six months, but the overall prognosis continues to be very good. Yay!
Posted by jenj at 9:49 PM