A weekend of riding

Fuzzypony and MC came out both yesterday morning and early this morning to ride The Boys. The three of us have decided (well, OK, Fuzzypony and I are trying to convince MC to go along with our mad plan) to try to attend two schooling dressage shows this fall. If for no other reason, it'll give us a goal to shoot for, and hey, it's fun!

Fuzzypony seems to get along better with Reddums and MC does very well with Cash, so we've switched it up a bit. Of course, I get Mr. Saga Lughead, which works well enough for me. He's been doing great since he got his new pedicure and new Dr. Scholl's Squishy Horse Boot Inserts - in fact, he was a little naughty both days, I think because he was feeling so much better. He's been alternating between leaning on the bit (a HappyMouth eggbutt) and traveling with his nose behind the vertical, refusing to take up the contact. I've been pushing him up into it and this weekend he's finally responding with more forward, which again I think is because his feet feel better. Toward the end of the ride today I did a couple of trot-halt-back-trot transitions, and that seemed to remind him to engage his hind end. We finished by having a lovely, balanced (gasp!) canter each direction on a 20 meter circle. Definitely improvement!

Cash definitely got the short end of the deal this weekend, as I dusted off his old hollow-mouth eggbutt and put it on his old double bridle (minus the double everything, of course). I've been riding him in a sidepull, which work just fine, but of course it's not legal in the dressage arena. Sure, we could go HC, but if he's OK with a bit, we might as well get some scores for our efforts! MC worked entirely on getting him to stretch down and forward and move out, and she had some very nice moments! 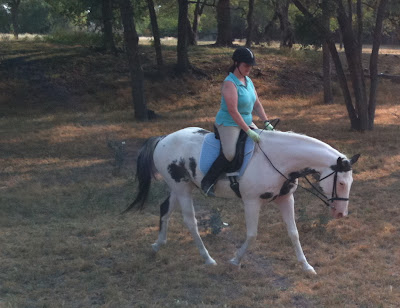 No really, they are not going for a Western Pleasure frame. 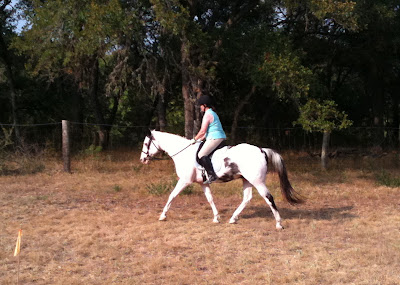 Nicely forward and stepping out. Does he look 23 to you? 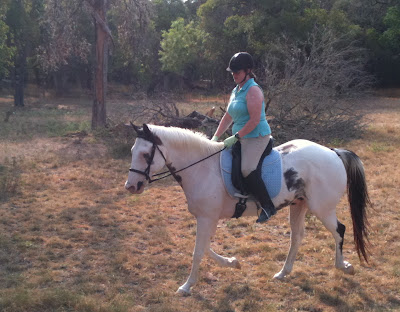 Poor Reddums didn't quite know what hit him, I think. Fuzzypony had him doing leg yields at the walk AND trot, plus turn on the forehand and haunches in addition to the usual WTC. They are still figuring each other out, and Red has the additional challenge of riding "around" his extra gaits. For example, sometimes he will fall into a foxtrot instead of a true trot, especially if you have too much contact when asking for a trot transition. This happens because he's been trained that he should gait when you increase contact on the bit and then push him forward. To get a true trot, or to get him out of the foxtrot, you actually need to soften contact and push him forward - it's a little counter-intuitive and for those of us who have never ridden gaited horses, you don't have any basis for the experience. However, they make a great team and are looking really, really good. If we can get Red's canter to be more balanced and consistently three-beat (again with that gaited thing), I have no doubt he could put in a nice test in the near future. 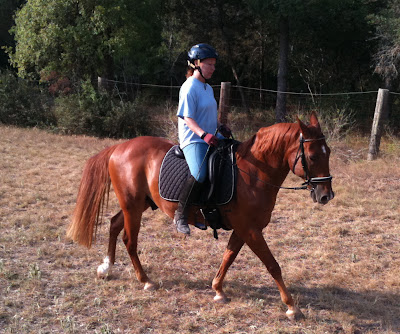 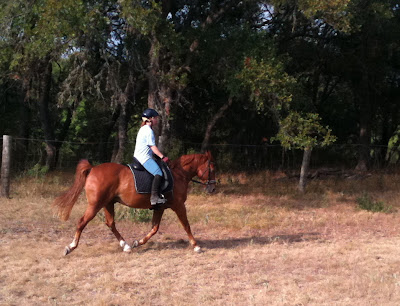 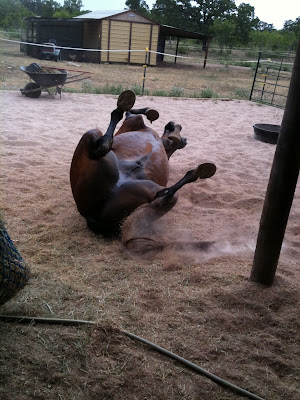 Of course, since I was taking pics, the only pics I got of Saga were after the ride, when he looked like this. 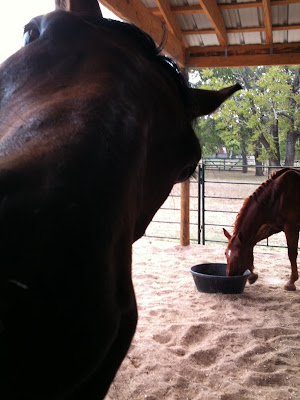