A trip down memory lane

I recently got around to emptying out some boxes from when we moved in (like 18 months ago, shush!) and found a couple of items that brought back some memories.

In 1995 when I was doing my undergraduate degree, I rode on the Western IHSA team for my university (there was an English team too, but the trainer was an absolute beotch, so I figured I'd have more fun doing Western). I qualified for regionals and went to Denver for that competition, and then I qualified for Nationals in Los Angeles. (NOTE: I am not a great Western rider by any standard, and I'm still not sure how this all happened.) Nationals were held at the Los Angeles Equestrian Center, which also happened to be the site of the 1984 Olympic Games. 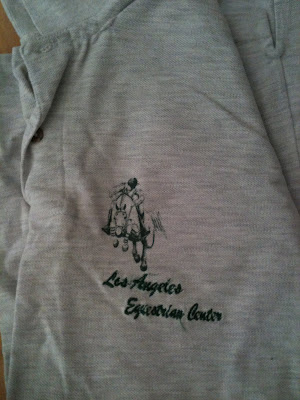 Here's my polo from the LA Equestrian Center.

Speaking of the 1984 Games, a friend of mine returned a bunch of videos last week which included my VHS tapes of the 1984, 88, 92, and 96 games. Fortunately, my copy of the 2000 Games are on DVD, 'cause uh, I don't seem to have a VHS player any more! Also, does anybody remember the water jump in the 84 Games, where they jumped into the water, then went up TWO WATERFALLS, then jumped out? That's like the coolest water obstacle EVER.

In 1996, the Olympic Games were held in Atlanta, and my mom managed to finagle tickets. I got to watch the cross-country up close and personal - HOLY CRAP those fences are HUGE when you're right next to them! Then I sat in a stadium with 30,000 rabid fans (ok, the rabid ones were the Brazilians) and watch the Grand Prix showjumping. That was an incredible experience. I also remember Lendon Grey doing a dressage demonstration ride where she was showing the audience what was correct and what was not. Her poor mount was SO UPSET when she asked him to miss lead changes on the tempis - he clearly knew that she was doing it wrong! Too cute! 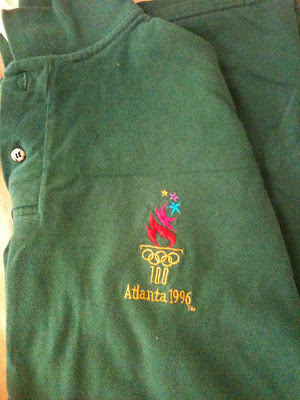 And here's my shirt from the Games. I wore this shirt for years for some clinics that I attended, and for a while I remember it was all the rage to wear your 1996 Games shirts to functions like that - especially if you had one of the volunteer shirts. At one point I also had a hat signed by Bruce Davidson, but that seems to have vanished somewhere along the way. 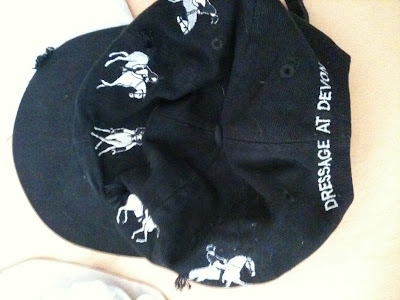 And speaking of hats, in 1998 my roommate and I went to Dressage at Devon and I brought this home.

We met up with a friend of hers who had purchased two (TWO!) horses from Iron Spring Farm, and she took us with her on a tour. They brought several of the stallions out for us to see, and I remember watching one of them stand himself up, arrange himself just so, and then gaze off into the distance. He knew he was gorgeous and showed himself off to his best advantage! I also recall watching the Grand Prix Freestyle where the audience's favorite ride was done to the Macarena (canter/passage/piaffe) and Don't Cry For Me Argentina (walk). Sadly, I can't remember what the trot music was. I also ended up buying a Neidersuss saddle at Devon, which is what I rode Cash in for several years.

I still use the Devon hat, but I don't wear polos any more, so I tucked them back into a bottom drawer. I thought about giving them away, but decided that for two small shirts, they carried too many memories to get rid of.

Do you have horsey things you've collected along the way that carry lots of memories?
Posted by jenj at 9:52 PM