Baby Oberon Pics, and a little help with history

Oberon's previous owner sent me some pics of him, and since everyone loves baby horsey pics, I figured I'd share! 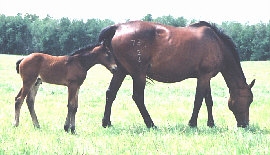 Mom and baby Oberon. I think her brand is 73, then 3, and either 1 or a down arrow. Can anyone else tell? I tried blowing it up in Photoshop, but the picture quality is pretty crummy. 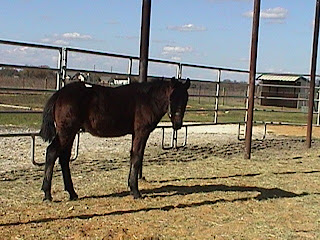 As a weanling bought at auction. 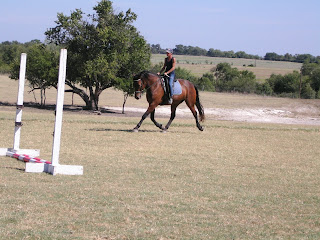 As a four-year-old, ridden by the trainer. (So next time he tells me he can't possibly go on the bit and carry himself, I'll know that he's LYING.)

Now for the help with history part. I believe Oberon is a PMU baby. Mom was supposedly a Standardbred mare (although dang, she is a BIG STB!), name unknown, and Dad was supposedly a black Percheron named Commander. Other than that, I know absolutely nothing. I've done a little Google searching on Commander and haven't found anything. There are a couple of Perch stallions with "Commander" in the name, but their ages aren't listed. Oberon is supposedly 10, so the stallion would probably have to be 1999 or earlier.

Does anyone know anything about ID'ing brands, or tracking down PMU babies? Google searches weren't very helpful, but I'm pretty sure I'm not the only person in the world who is interested in doing this.

Any help would be much appreciated!
Posted by jenj at 9:12 AM