I know everything is bigger in Texas, but could we please have smaller spiders?

Tonight, I took Saga for a looong walk. We were out for about an hour and a half, enjoying the sunset and the (slightly) cooler temps as the sun went down. 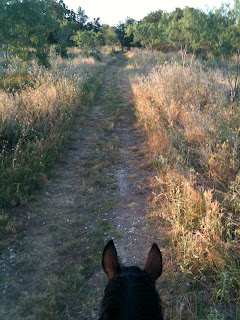 It's been a month since we've had rain, and things have turned their usual heat-baked brown.

Saga was doing his "power walk" down the trail on a loose rein, and I was admiring the deer, birds, and rabbits... until I almost got a face full of this: 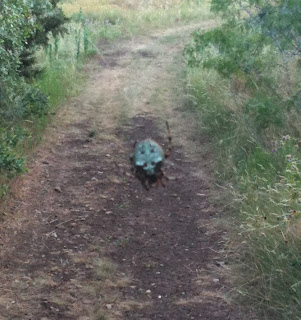 Yes, I know it's a crappy iPhone picture, but I SWEAR, this thing was about an inch and a half across. That picture was taken from about five feet away, and that's how ginormous it was! I managed to duck at the last minute, and we avoided it, but I swear if I had run smack into that spider and had it ON me, I would not have been responsible for my actions.

Here is a way better close up of a Giant Lichen Orb Weaver taken by somebody with a really expensive camera who was probably not trying to control a horse while taking a photo one-handed. Photo credit goes to this web site.


In other news, the snake I found crossing the road last month was hanging out in the barn last night. I'm not sure where he disappeared to - he slithered off while I was running for the camera. I do hope he leaves a note as to his location, so he doesn't scare the ever-loving-crap out of me when I go out to feed. The neighbors might wonder if they hear screaming at 6 a.m., you know?
Posted by jenj at 10:45 PM