Hubby finally decided today, we're keeping Justin! And as of now, his name is Oberon. He just isn't much of a Justin, it seems.

He's really been a star for the last few rides. It doesn't seem that jousting will be any problem for him, although we are still working him up to the full-blown joust. He's got a ton of lovely dressage buttons - leg yield, shoulder in, haunches in, half-pass, as well as turn on the forehand and haunches. He's got a lovely medium trot, and his previous owner even told me she was working flying changes. He can be a little hard to get going, but we're both used to riding horses that are very forward, so this is a change. He can be a little inattentive both on the ground and under saddle, but even in two weeks, he's much more respectful and easier to work with. He loads great, and my trimmer loves him and his feet. 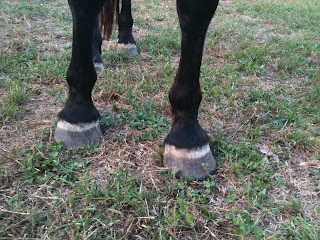 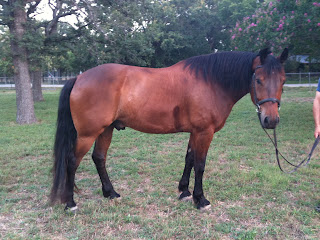 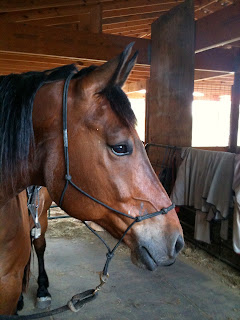 Did I mention that he's kinda cute?


One of the main things we were concerned about - his tendency to stop and look at things - is apparently easily overcome. We've been riding with small spurs and a bat that makes a good "smack" sound, which he is very impressed by. He now stomps on manhole covers - literally, he slams his foot down on them so I know he's stepped on it. He's also miraculously lost his fear of the front gate after just one session:

We had a fantastic jumping lesson this morning which I'll fill in on tomorrow - we're going to a jousting practice in the morning, and I need to get to bed!