Saturday we took Oberon for his first jumping lesson. I'd jumped him during our try-out ride over a few x's, and he did fine, but we wanted to see what our jumping instructor thought of him and how he behaved in a new place.

The lesson was at 7:30 am, which while insanely early, was also relatively cool. It's been 100 degrees here in the afternoons for the last few days, so riding when it's 70 is very nice. Oberon was inattentive during warm-up, but not spooky. I could not get my spurs to stay on the spur rests, and as a result, our canters were pretty much non-existent (really gotta work on that). We did, however, have some lovely medium trots, which our instructor commented on. Too bad I wasn't asking for a medium trot...

We moved right into jumping two small x's on a line. He sort of stepped over them, and our instructor asked me if he's actually jumped at all. I assured her that he had, and we just needed something slightly more impressive. We tried the x's from the other direction, and in between the two fences, Oberon spotted a car coming down the driveway. He watched the car quite keenly as we trotted on, and at the last moment remembered to pick up his feet over the second x. So much for keeping his mind on the task at hand!

The fences went up, and up some more. He started to canter in a nice, forward rhythm. Two verticals became a vertical and an oxer, and the oxer went up. We ended at 2'9:


I commented that the fence wasn't all that scary, and could we try something like a gate. So Paige put up a gate on the oxer, and we had a slightly hairy moment:


Definitely not my finest riding moment ever, but we made it over and didn't land in too much of a heap. Of course, we had to try it again to perfect it:

Overall, it was a huge success! Considering that Oberon hadn't jumped until a month ago when he went to the trainer to be sold, I'd say he's doing fantastically well. I don't think he'll have any problems at all with the 3' coops we find out in the hunt field, and he should be able to bomb around a Novice course with some good miles on him. It's pretty clear that he hasn't seen much in his life and needs experience, but he does try, which is good. My riding didn't help much at all - I felt super loose in the tack, and couldn't seem to keep my leg on him to save my life. I also wanted him to pick up the pace, instead of just letting him get to the fence. Old habits of "chasing" down the fence die hard!

Our jumping instructor really liked him - liked his pace, thought he could be super cute with his knees, and liked that he tried.  Alas, she did say that he's a bit "clunky" for the hunter arena. Poor Oberon. Clunky. Imagine that! 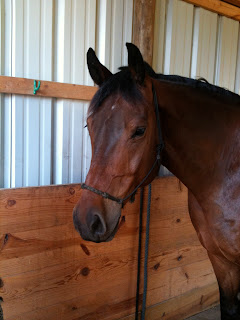 Is this the face of clunkiness to you? With those cute ears? I didn't THINK so!
Posted by jenj at 9:43 PM