Despite the heat, this weekend has been a good one for riding.

Saturday morning, I went out with a neighbor I haven't ridden with before and won't be riding with again. For starters, she was 30 minutes late and didn't bother to apologize. Her horse couldn't keep up with Oberon on the trail, and he's SLOW. Her horse is a 4 yo red roan gelding that she's been riding since he was two. He looks halter-bred... biiiig old muscled butt and shoulder, tiny feet, tiny head. He's probably 1300 lbs and is like 14.1 hh. Her farrier sold him to her but refused to tell her the horse's breeding or hand over his papers, despite saying that he's registered AQHA (can you register roans as AQHA? I don't know...). Are you shocked to hear that the horse is almost certainly HYPP+? She described muscle tremors down his back and flanks, and heavy labored breathing, that he does occasionally. Sounds like some HYPP attacks I've heard of.

The best part? She's taking him to a children's summer camp next week and hopes to sell him as a family horse to one of the children there... because his attacks "aren't that bad."

Yes, that's the sound of me smacking my head against the wall. Repeatedly.

Yesterday I rode Oberon and today Bre (from G is for Greta) rode him. He was a little looky for me but a tap or two on the butt with the bat, and a solid kick, gets him going again. He's learning to march on no matter what, which is really what I want him to do. His one big spook (big = he took three steps sideways and stared) was when a cicada started buzzing loudly in the shrub we were walking past. Silly boy. 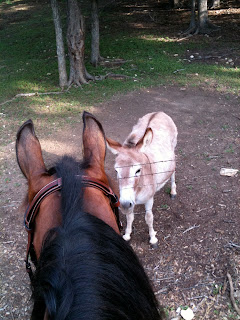 This horse-eating donkey, however, was apparently not scary at all. 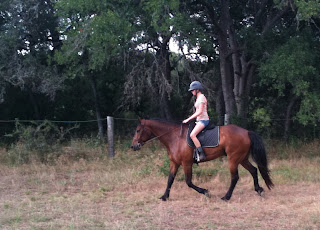 I have no idea how Bre manages to ride in shorts, but she does... and makes the horse look pretty nice too! 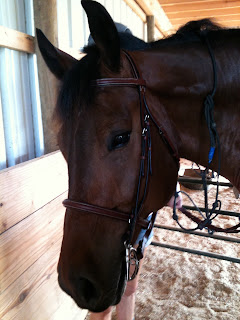 Oberon's new bridle came in the mail Friday. I think it looks good on him, although white stitching is not my favorite. I'm waiting on his French Snaffle bit to arrive, but for now he's going in a kimberwicke, which will be his hunting bit. Do you have any idea how hard it is to find 6 inch bits that don't cost $200? Sheesh! 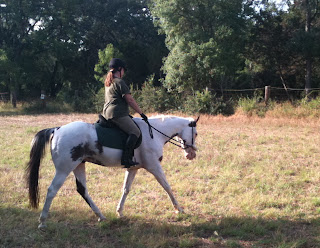 MC also came out to ride this morning, as she does pretty much every weekend. I must say, she's got Cash going fantastically well! I'm thinking they need to attend a dressage show or three this fall. 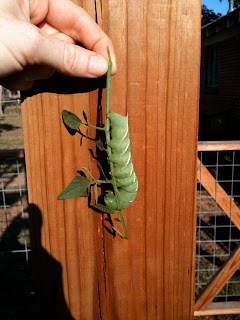 I found this enormous tomato hornworm caterpillar munching down my tomato plants. I think that's the biggest caterpillar I've ever seen... that's my hand holding that twig, and I don't have small hands! I fed him to the chickens after taking this pic. Yeah, revenge is SWEET! 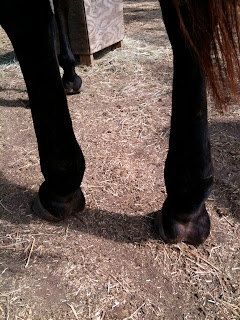 In other news, Saga is out of work AGAIN. This is what his hind legs looked like Saturday morning, the morning after our long walk. Um? He's not running a temp, he's not lame, his front legs are fine, he's eating fine, and he's turned out 24/7... he's just really really stocked up! Cold hosing and ice wraps don't seem to help any. Bre is loaning me her BOT wraps, so maybe those will make a difference?

I hope everyone else had really great weekends for riding!
Posted by jenj at 11:15 AM