15 minutes is better than no minutes

We have a dressage schooling show this coming Saturday. I know, I haven't mentioned that, right? I signed us up for Intro A, B, and C, on the theory that we should at least get out and get some miles, even if we've got more things to work on than I can count on all my fingers and toes. I'm hoping to stay in the arena and stay on Paddinton. Gotta start somewhere, right?

To ensure that we don't make complete fools of ourselves, I've been trying to squeeze in as many rides as I can - coming in to work early so I can leave early and ride while it's still light (no arena and no lights make daylight hours precious), sneaking in rides during a (long) lunch hour, whatever. I've been doing pretty well, and the rides have been productive, but last night it just wasn't happening. Work ran late, the boys didn't cooperate with the evening barn chores, and I was rapidly running out of daylight. No problem, I thought, instead of riding, I'll just longe him a little. Then I realized how dark it was and decided we didn't even have time for that. I almost decided not to do anything with him, but then I decided that even a little bit of something was better than nothing at all.

So we worked in-hand for 15 minutes, with a rope halter and a lead. And you know what? It was really productive!

We started off with yielding the haunches, focusing on getting the RH (his stiffer leg) to be more active. Then we worked on moving his shoulder over. As expected, he was sticky moving the RF. We worked on moving his whole body sideways when asked. Then we worked on a little leg-yield in-hand, along with stopping and backing up. I didn't drill on any one thing for more than a few steps - when he got it, I'd ask for something else. After 15 minutes, he was much more responsive moving left, focused on me, and working well. I gave him a pat and a cookie, pulled his halter off, and called it a night.

So even if you only have 15 minutes, or 10 minutes, or even 5 minutes, USE IT. Do something productive. Every little bit you do every day helps. Heck, sometimes I think those short-but-sweet sessions are better than an hour-long ride, precisely because you don't drill-drill-drill. You get in, you look for the positive response, you reward, and you move on.

What do YOU do if you only have a little bit of time to work your horse? 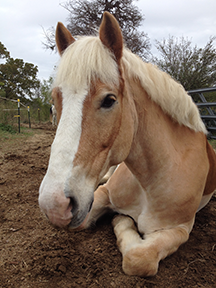