It's odd, but there aren't really any eventing trainers in the Austin area. Lots of H/J, lots of dressage. Eventing? Not so much. There was one at the barn I used to board at, but her teaching style didn't work for me, so I've mostly been on my own. This year I have been lessons catch-as-catch can with a H/J trainer and a dressage trainer, and working with a third (non-local) person when going XC schooling. But, there's a new eventing trainer in town, and I wanted to try her out.

(Random aside: we've been trying to get together for a lesson for a year. First, Saga went lame, then she moved to CA. This summer, she moved back to Austin, and then Echo was diagnosed with HS. So after a year, I finally managed to make a lesson with her on Paddy. Persistence pays off!)

We hauled out to the facility she teaches out of, which just so happens to be where FuzzyPony keeps her retired mare, who is Taran's mother (small world eh?).  Paddy came out of the trailer alert but relaxed, so we quickly tacked up and started in the covered arena. We did one walk lap each direction so he could look at the chairs and mirrors and such, then picked up the reins and got to work. He was actually much more relaxed over his back than usual - maybe he was more comfortable in the indoor? Anyway, I explained to the trainer what we'd been working on, and she immediately pointed out that he was stepping a bit short on his RH. Not lame, just that leg was not working as hard. I mentioned that I felt that the saddle was canted to the right most of the time, and that he had a very hard time moving off my right leg. The RH not carrying as much weight explains all of that, no? So we immediately started working on exercises to engage the RH:


Following some fabulous trot work where he felt much more even and balanced, we went to the outdoor to get in a bit of jumping. Our less-than-stellar canter departs were met with "Oh, that's not as bad as I thought they'd be," and we went on to cantering poles in a line. Paddy's job was to figure it out, my job was to keep him straight. Unfortunately he got rather barge-y through the middle of the 4 poles, but I ran him into the arena rail stopped him on a straight line each time after, and he came right back.

I learned an early lesson, which is to POINT HIM RIGHT OF CENTER. The second time through on the right lead, he opted to duck out left in front of the second ground pole, and I almost face-planted into a jump standard. Seriously, I was staring that bad boy down thinking about how much it would suck if I actually hit it with my face! Fortunately Paddy has a thick neck and I have a good sense of self-preservation, so I wrapped my left arm around his neck and pulled myself up from falling off his right shoulder. After calling him a few choice names, we came again, I steered and kept my left leg on. Much better. We called it a day after having him go through once each direction with a balanced canter on the approach - through the grid he was still rushy, but was figuring it out on his own. Smart Pony!

So it was an interesting lesson. I really got a lot out of the dressage part of the ride (the tips on getting the RH to engage were GOLD), but the jumping part I'm not so sure about. Yeah, he can run down a line and get over All The Things, but at this point I feel like he needs to learn to slow down and think about things instead of just attacking. Are ground poles the way to go, or are there better tools we can use? This is an interesting question, because the following day I had a lesson with my H/J trainer, who had a completely different approach... stay tuned! 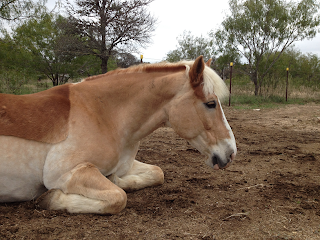 Also, Mom got me up from my nap to do this "lesson" thing. So. Mean.