DISCLAIMER: This post contains pictures of myself and others riding without helmets. I am all too aware of the dangers of riding sans-helmet... so much in fact that I literally cannot recall the last time I did it. Yes, we all took a calculated risk. No, I don't recommend ever riding without a helmet. You will also see pictures of things happening that most horses would not tolerate. As jousting horses, our boys are exposed to things that most horses aren't, and tend to be somewhat more tolerant. Again, it was a calculated risk - don't do this stuff at home, folks. I am probably risking The Wrath of the Internet with this post, but for some reason I thought it would be fun to share, because it was a cool experience and we enjoyed doing it. If you feel that one should always wear a helmet no matter what and never do crazy stuff like this, please go read another blog. If, on the other hand, you enjoy a short story about Crazy Stuff We Did This Weekend For A Charity, read on.

And now, the good stuff:

As if a stellar first-time dressage show wasn't enough for one weekend, on Sunday we took Red and Paddy to help film a holiday commercial for Goodwill. It was a friend-of-a-friend-of-a-friend situation - someone needed horses and knights in armor, our friend knew just which suckers who to ask. So we showed up bright and early on Sunday with our best jousting caparisons, my matching heraldic dress, and hubby's armor.

The gist of the commercial is that a little boy is dreaming that he's riding with an entourage through a medieval village, and meets the king, who gives him a sword. The scene then cuts to modern-day... and I'm not involved in that part, but it involves donating to your local Goodwill store.

This was my first experience with film, and let me just say it's not as exciting as it looks. We literally had to do the same walk-down-the-path shoot 30 times, with the cameras in different positions, getting close-ups of each person's face, getting close-ups of each horse, etc. Hubby and I played part of the boy's entourage for this part of things, although we were in the back. 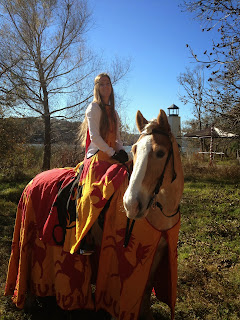 Paddy practices his medieval warhorse look, while I demonstrate why there is no way I will ever be able to do Hunter Hair under my helmet.

In between takes, we all chatted, while the horses took turns staring and snorting at The Sheepskin Of Doom, which one of the crew had left sitting out. 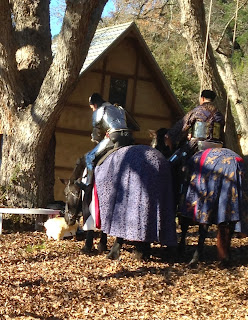 Big Perch-X mares refuse to get anywhere near the sheepskin.

Paddy was feeling pretty "meh" about the sheepskin while the two big mares (shown above) snorted and stared at it. I asked him to walk up to it, which he did. Then he reached his nose out to touch it... and apparently the sensation of it tickling his nose surprised him, because he teleported about 15 feet to the left. I was all loose in the saddle and went with him no problem, but everyone thought it was pretty hilarious. Red, of course, marched right up to it, stuck his nose in it, and was all "Feerless War Ponies are not afraid of Sheepskins!" I halfway expected him to pick it up in his teeth and toss it at the mares, just for the sheer fun of seeing them bolt for the hills. Alas, apparently Red doesn't have quite that much of a sense of humor! 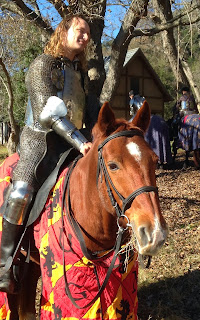 Red has the War Pony thing down pat.

After we finished doing the 912348767834 takes of the horses walking down the road, we moved to another site on the grounds to get some shots of riding, from the little boy's perspective. For this, the Steady-cam camera had to be attached to a person in the saddle... and the horse that the little boy was riding was not interested in being part of that. Since Red and the little boy's horse are both chestnuts, we decided that we'd see if Red could handle the camera contraption on his rider and be the "stunt double" for the other horse's ears. We talked to the camera guy about the risks of riding a horse, waved the camera around up over Red's head, had it make whirring noises... Red didn't care. Finally, we carefully got the camera guy on Red, then carefully attached the camera to him... and off we went. Either I led Red while the guy filmed, or Red was led by someone on horseback with me close by, ready to grab the horse and/or the camera guy in case something happened. We needn't have worried, though, as Red was a total rock star and never put a foot wrong. 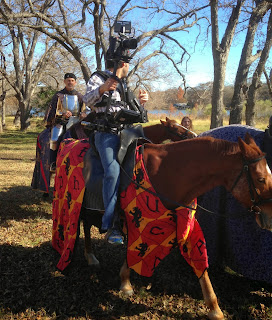 Feerless War Ponies are also not afraid of dudes with big cameras attached to them. All part of a day's work.

For the final bit of filming, the boy's entourage meets up with the king, who draws his sword and hands it to the boy. The guy playing the king had had some bad horse experiences, and was understandably nervous about being on board again. We put him up on Paddy, who stood like a rock for over an hour while people jangled armor, drew swords, waved boom mikes in his face, and stuck light boxes under his belly.

The final scene, taken from Paddy's back. Cute Haffie earz (bottom center) played by Paddington. Guy in armor (lower right corner) played by Hubby. I'm on the left on Reddums, who appears to be taking a nap. Other friends are in the picture and shall remain nameless to protect their identities. Not shown: all the camera equipment to Paddy's left.

They finish filming this coming weekend, and the commercial should begin to air on Monday the 23rd. It will even be aired during the Superbowl on local stations! I don't know how much Red and Paddington will be visible in it, but I'll post a link as soon as it's available. In the meantime, Paddy and Red are considering a move to Hollywood to pursue their acting careers. After all, Paddy's got that blond surfer boy look... chicks dig that, right? Besides, after the show Saturday, he's getting used to girls rushing up to him squealing, "OMG HE'S SOOO CUUUUTE!"
Posted by jenj at 3:22 PM