Jumping ALL THE (small) THINGS on cross-country

Yesterday, the weather finally cooperated and hubby and I made the two-hour drive to Pine Hill to take Red and Paddington cross-country schooling. It was Paddy's first time out, and I wanted to have a super positive experience. The plan was to jump all the Green-as-Grass (GAG) and Goldilocks fences, and maybe to a Beginner Novice jump or two if they didn't look too scary.

Almost as soon as we unloaded, we were accosted by a lady who had grown up riding a Haffie. Paddy got the requisite "HE'S SOOO CUUUTE!"  exclamation, and we chatted a bit about how awesome Haffies are. Paddy's great at the trailer except he wants to be able to see Red at all times, so he carried on this little one-sided conversation while we were tacking. Red could have cared less about the whole thing, and ate grass on his side of the trailer while pointedly ignoring Paddy. 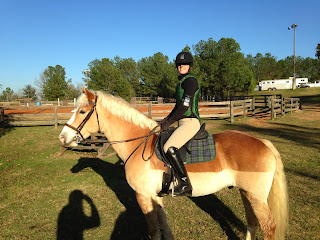 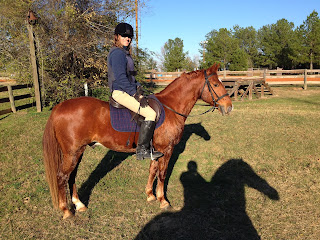 We started out with a WTC warmup each direction - he was super awesome. Not looky, didn't rush, got the canters both ways with minimal fuss (hooray!). We took a quick walk break, then trotted up to a small log. Paddy hit the brakes right at the base, I clucked to him and smacked him on the shoulder, and he launched over it. We jumped it a few more times, then moved on to the first official fence on the course. Given that he was hesitant about the first jump and I wanted this to be very positive for him, I decided to follow Red over the next few fences. We did a rolltop, a small white coop, then a brush fence. Paddy jumped them all like a pro following Red, then we went back and did each one by ourselves. He was balanced and forward and cracked his back over every one!

Next we decided to play in the water a bit. Paddy followed Red in the first time, but I don't think I needed to have been concerned about him going in - he was quite happy splashing around in it, and popped in and out with no problems! 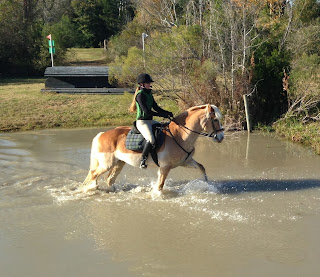 Other notable highlights included a canter up a steep hill to a small log at the top and then cantering down the hill (no problem, and he was very balanced both up and down the hills), a small ditch which he cleared by 10293472 feet, and a good-sized brush fence that he didn't even blink at. The very last jump on the course was a rolltop that is shared with BN - not huge, but Paddy made a good effort over it.

For his first time out, I could not have asked for more. He was quite balanced and rateable (I rode him in a kimberwicke) and he jumped ALL THE THINGS. We had a few iffy moments at some "scary" fences, but I sat up, closed my leg, and gave him a little smooch or tap, and he went right over.  He's definitely a forward-thinking guy, and that's really what you want in an eventer.