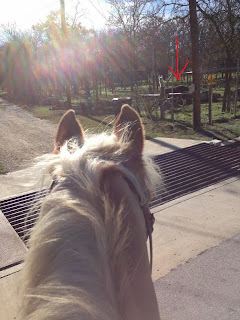 Paddinton's built-in llama detector says that the llama is RIGHT OVER THERE!

Yes, our neighbors across the street have a llama. Fortunately, the drama is usually limited to pricked ears and a snort or two. Unless the llama gets up, in which case a good spook may be necessary. Just FYI.

What's the scariest thing YOUR horse has ever seen?
Posted by jenj at 1:19 PM