Keeping the waterfowl in a linear arrangement

After Leo's minor meltdown on Saturday, we had a plan for our Sunday clinic ride to keep reduce his anxiety so we could get some work done. This involved parking Griffy in the arena with a haynet while I rode Leo which... was pretty much the magic bullet.

Unfortunately, hubby had to take a work call so I have only a tiny bit of media for my ride. 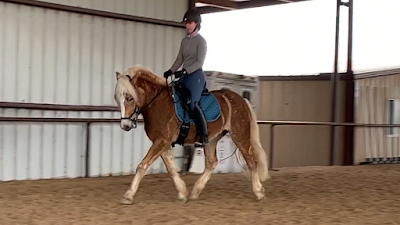 Have a random picture of us trotting. And yes I promise never to pair those breeches with that saddle pad ever again, you're welcome.

We worked a lot on keeping a steady tempo, using very small corrections with my seat (and keeping my damn thigh on when I'm posting, that helps LOADS). When we had small steering issues (aka me pulling too much on the right rein), a small step in my outside stirrup straightened him right up underneath me. A moment of me riding off my hands rightfully resulted in a great deal of protest from Leo - he may be the horse that finally teaches me to ride with my seat instead!

Because Leo spent 60 days at a colt starter before we got him, he has what is fondly referred to as a "huge stop". What this means in reality is that he might drop onto his forehand and slam on the brakes when asked for any sort of downward, which puts me in jeopardy of going off over his ears. He likely also spent a lot of time backing up immediately after a halt, so he tends to stop with his hind legs splayed out to either side, resulting in kind of a wobbly drunk-looking halt, often immediately followed by him backing up a step or two. We worked on stepping UP into trot-walk transitions, continuing the forward motion and staying in front of the leg. This is quite a challenge for him, but when I had everything organized and asked very softly, he was right there for me. And having the R+ "YES!" bridge available to me was a huge help too, because I could tell him when he had done it right. 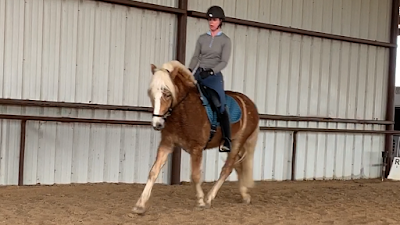 Getting a little more relaxed through the back and over the shoulder, let's not talk about my stupid inside hand.

Since he was working so well, my confidence was high and I felt organized enough to canter. I had warned my trainer that she wouldn't like it much because it's on the forehand and lacks suspension, but actually our right lead canter felt quite good! We only did a few strides before asking him (softly, so softly, just exhale and NO HAND) to come back to trot and rebalance, and we did that several times each direction. 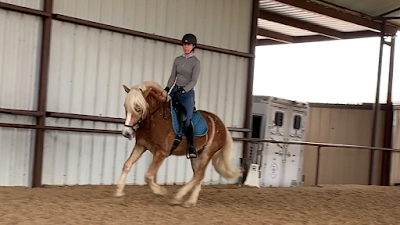 Trainer's comment was he's simply unbalanced in the canter because he's young and got a fairly big stride for his size. For now, my homework is to do lots and lots of soft transitions to help him find his balance, but not to canter in endless unbalanced circles. Given the quality of his walk, she thinks the canter will improve some with time and training. 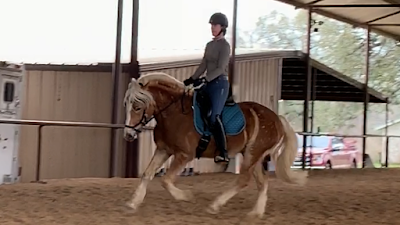 Bit of a long video, but it's a good example of where we're at now. And no shenanigans, sorry!

I clearly need to do a lot of work on my core in sitting trot - it's just up there wiggling around. The funny thing is, I can be really quite strong with it, but it's almost like it's either on or off. Isolating body parts is hard, but thanks to Megan, I've got some ideas of things to work on. 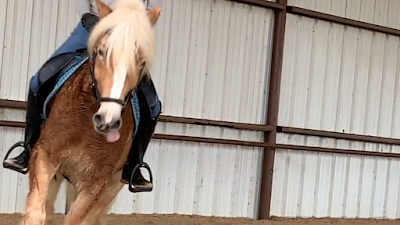 How Leo feels about my riding, probably.


The session ended on a really good note, especially considering where we stared on Saturday. My trainer actually really seemed to like him (I'm sure the floofy forelock and cute personality helped) and basically told me to keep him and see where we are in a year. Which is good, because I've already signed us up for a schooling show this coming weekend!
Posted by jenj at 10:39 AM