Leo and I went to a local schooling show this weekend, his first one ever. We'd signed up for Intro A and Intro B, because I wanted to keep things super low-key and make the experience very positive.

Late Thursday night, we had a cold front move in, so it rained and sleeted all day Friday and I don't think it got over 35F. 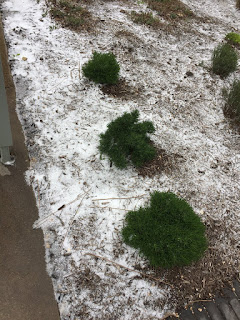 This is enough to make me want to crawl into a blanket fort in front of the fireplace and not come out for a month.

Saturday morning wasn't much better, 34F and raining. Warmup was in the outdoor and tests were ridden in the fairly dark, spooky indoor.

As I tacked up in the rain, Leo got a bit anxious tied to the trailer as we were nowhere near any other horses. I've mentioned that we've clicker-trained Leo to target the plastic swords we used to practice with, and there happened to be one in the trailer. Hubby had the brilliant idea of doing some target work, and Leo immediately focused on the fun task and hand and calmed down. Another win for R+! 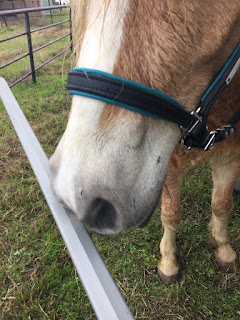 I ended up hand-walking Leo all over the grounds, just to check everything out. He was interested in sightseeing but overall really chill. The only thing he looked at was a tarp covering a trailer hitch, but he marched over to it and touched it anyway.

I got on with about 30 minutes until our ride time, and did a lot of walking before gathering up the reins and doing some trot work. We focused on staying relaxed, straight, rhythmic, and in front of the leg (all of which is like... super hard). He was actually really focused and soft, considering the wind chill and driving rain. 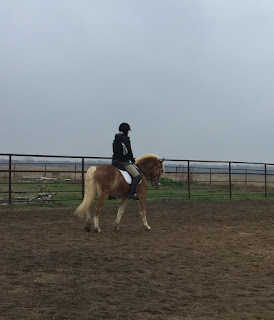 The show was running a bit behind, so we ended up taking more walk breaks than I had intended. Eventually our turn came, and we headed over to the arena and went in. 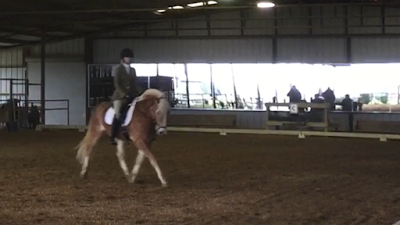 And... he was absolutely stellar. Sure, he called out once or twice, our transitions weren't all perfect, circles could have been rounder, etc. etc. But he stayed focused, soft, and relaxed, which was everything I could have asked for. 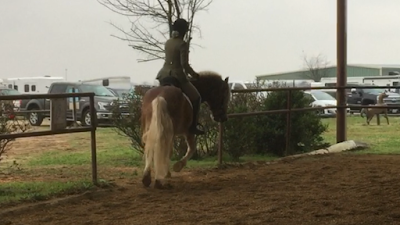 There was this one part where he tried to exit stage left... someone's outside leg wasn't actually doing anything, apparently.

We had some super fancy moments that are a hint of what might be to come: 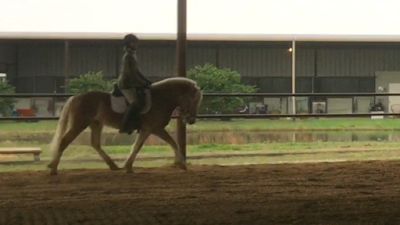 Annnd then we had a few awkward baby moments: 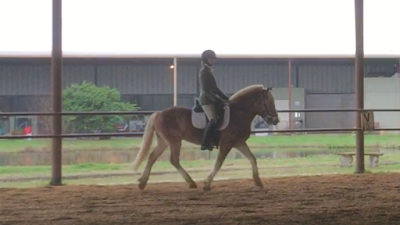 Lookit the thing over there!

We had a couple of rides before Intro B, so we mostly just walked around and practiced some halts. Unfortunately, by this time I'd been on him for an hour, and he was pretty much done. We went back into the arena and got the test completed, but he was sucking behind my leg and we had some sticky spots. It wasn't really ugly or anything, but it definitely wasn't as smooth as our first test. Still, he didn't look, only called once or twice, and generally did what I asked.

Intro A, minus the walk part at the end because hubby's phone bricked due to the cold.

Our final scores were a 71.5% on Intro A and a 69+% on Intro B, which was very generous. I have no idea how we placed, since we left right after we finished - but really, it doesn't matter. He was a super kid and there were no shenanigans. For our first outing, I'd call it a success! 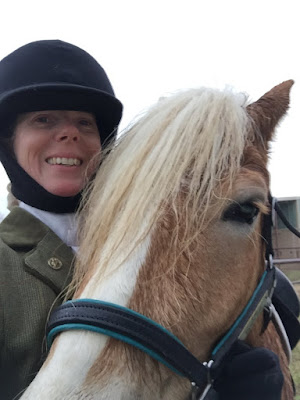 For some reason, Leo seems significantly less excited that I was... :D
Posted by jenj at 10:09 AM