This weekend was Leo's first clinic with GP trainer that comes down from VA once a month. It was the first time she'd seen him, and I was anxious to hear her opinion.

We'd bought Leo as a second jousting horse for hubby, but it became clear pretty quickly that he likely wasn't going to be stout enough to carry the weight. He's the same height as Paddy, but about half as wide - definitely more of a sport model. So then the question became, do we keep him or not? The little guy has really grown on us in a few short months, despite all his challenges. 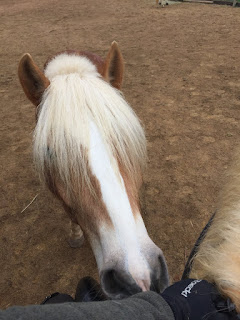 Proof that he really *does* follow you around when you're riding another horse. Yes I gave him a cookie, how could you not with that adorable face?

Leo and I started the session with usual walk around the arena in-hand, then did a little ground work in hand before I hopped on. He'd never been to this venue, and seemed a little anxious despite Griffy being in a nearby stall. The moment I got on, we started having problems that I thought had been addressed. The steering quit working, even at the walk. He sucked behind my leg and slammed on the brakes randomly. Our walk squares, which at home have been very evenly paced with a smooth quarter TOF at each corner, were more like wobbly squiggles with questionable careening at each corner. 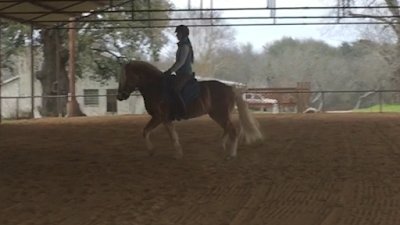 We worked on slowing him down from my seat, with tiny tiny corrections here and there. As trainer put it, even stepping a bit in my outside stirrup was a HUGE DEAL to him, so I need to scale way back (completely opposite from Taran). Eventually we moved on to trot, but the anxiety levels continued to escalate despite lots of pats, cookies, and "good boys," so we went back to a 3 loop serpentine at the walk.

And then he decided to protest in earnest:


Here's the highlights if you don't want to watch the video: 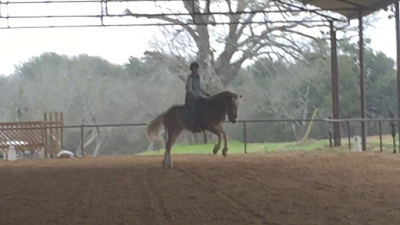 I swear to you, I had just VERY GENTLY asked him to trot. 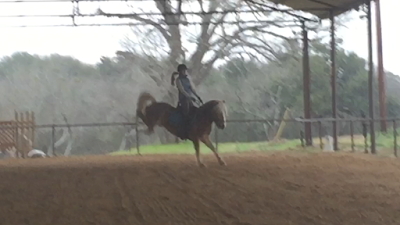 Nothing like hearing your trainer laughing hysterically after this move (to be fair, she did ask me if I was OK before she started laughing)

She did seem pretty excited when he tried this: 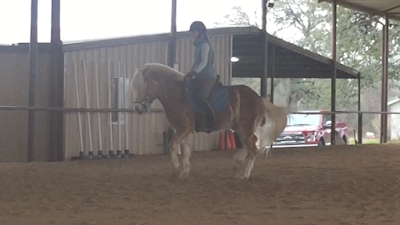 I WILL PROTEST WITH HALF STEPS SO THERE

About this time, hubby came in to warm Griffy up for his session, and it was like someone had turned a switch on Leo. All the tension left. Steering returned. The hamsters that had fallen out of his brain all returned of their own accord, and we were able to go back to work.

And he was effing brilliant (of course I have no video, you'll have to trust me here). We worked on 20, 15, and 10 m trot circles, a little leg yield at the trot and shoulder in at the walk, lots of transitions, big trot/little trot, you name it. It was super fun to ride, I almost didn't want to get off! 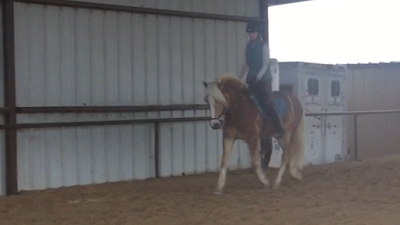 So much better! Probably would also help if I quit staring at his ears.

Based on Leo's behavior, we decided that for day 2 of the clinic, we'd keep Griffy in the arena during Leo's ride. It's weird, when we haul solo to our weekly lessons, Leo seems just fine. When Griffy is in the arena away from home, that's also fine. But I guess we cannot horse (for now) if our support haffie is not directly visible when away from home. Clearly need to do a lot more traveling with this one!
Posted by jenj at 10:50 AM