I am currently waging a war on a rather noxious weed common in central Texas called Silverleaf Nightshade. 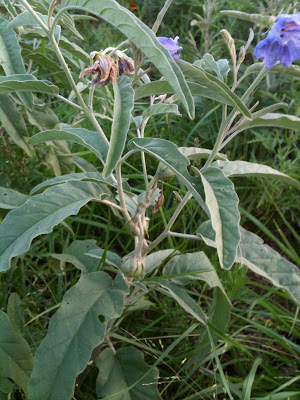 It's a woody, herbaceous plant that grows about 2 feet tall, has purple flowers and spiny bits around the base of it's stem, and is toxic to sheep and cattle, and in an odd, roundabout way, horses. 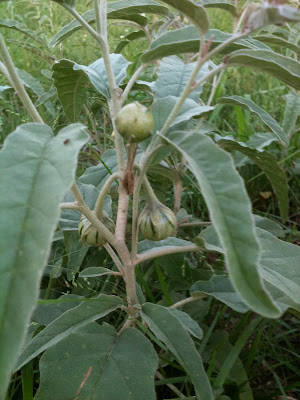 These little seed pods, which turn yellow-orange when ripe, are of particular concern.

Interestingly, horses that eat the plant don't show adverse effects, although sheep and cattle do. The reaction occurs when a horse that's been eating the plant is wormed with Ivermectin - apparently the combination of the two develop a neurotoxin, and drooling, head pressing, and even death can occur. Eeek!
Fortunately, the boys don't eat it, but I don't want to chance them getting one of the seed pods by accident. Several years ago I boarded at a barn that got a load of hay that had nightshade in it; about that time a horse on the property died a rather horrible death. The autopsy was inconclusive, but I've always suspected the two were related.

Anywho, I have been diligently pulling the little (ok, big) buggers out of the back pasture, maybe 5 minutes per day for the last few days. They're apparently really hard to kill because they spread by their underground root system, which is extensive and deep. However, if I can prevent the seeds from spreading, and pull the big ones out of the ground consistently enough, I'll eventually get them under control. I hope.
Posted by jenj at 9:01 PM