Our second bathroom is almost done! The toilet and sink are fully functional, and we just have the trim to install and some touch-up to do. OK, and we have to tile the entire shower, but that's for later. What's absolutely fantastic is that I no longer have to stagger to the other end of the house to use the toilet at 3 a.m. Let me tell you, that's a huge improvement!

I didn't take many pictures of the process because I was elbow-deep in paint and drywall texture for most of the time, but here's a few details. 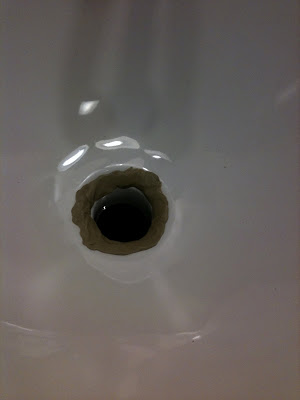 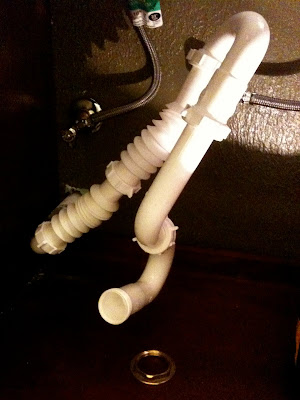 Epic kludge of plumbing. We had to be creative to get from the sink drain to the pipe coming out of the wall, which is in the lower left corner. However, it drains well and nothing leaks, so I'm not complaining! 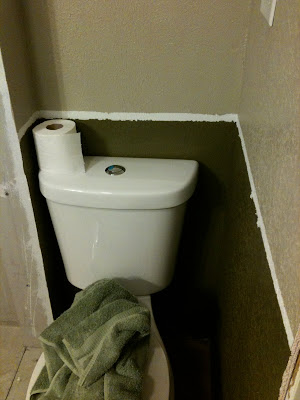 The new dual-flush toilet. It took us quite a bit of adjusting to get the two flushes right, but it's pretty spiffy! 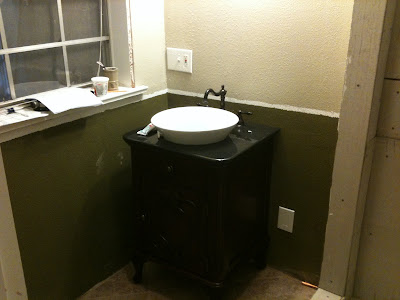 The vanity, installed, which is a minor miracle. The assembly instructions were ATROCIOUS, so we sort of made it up as we went along. We ended up with a handful of parts when we were done, which is a little... disconcerting. However, it seems to work just fine. 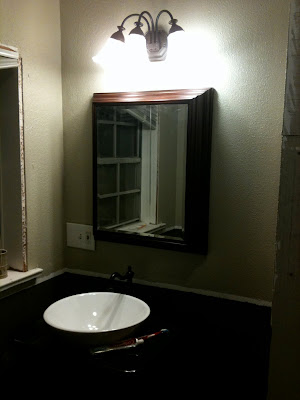 And the final touch, the mirrored medicine cabinet. We still have to install the chair rail (it'll go where the white line is in the picture), baseboards, and trim around the door and window, plus touch up the ceiling. Oh, and hang towel racks and such. But still, we're very close to being 100% done.

OK, 100% done except for the shower. But I'm ignoring that for now, because I have a functional toilet just steps from our bedroom. How civilized!
Posted by jenj at 9:26 PM