Yup, the hubby's out of town again

The hubby is often out of town, traveling for work. Inevitably, things break in catastrophic ways, but ONLY while he's out of town. Usually, it's worse when he's out of the country.

Yesterday, he left for a conference in the Dominican Republic. So, I just KNEW I was in for something. I figured that it would have to do with the plumbing we just installed on the second bathroom (more about that in another post). But it's turned out to be something else entirely.

So... we don't have a proper barn yet, and the boys make do with a run-in shed that's been (very poorly) built off the side of a Morton shed. The barn is in the planning stages - it's actually our next project - but as of today, a proper barn got nudged more firmly to the top of the priority list.

When I went out to feed the horses this morning, this is what I saw: 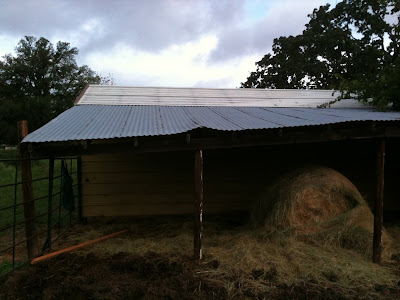 Not that the shed was ever particularly straight, but this seems to be listing a bit more to the left than absolutely necessary. 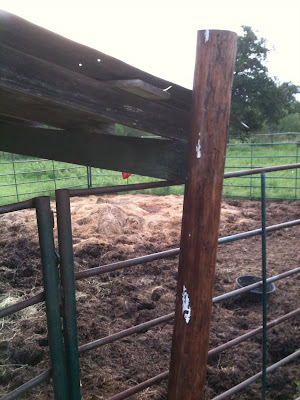 It turns out that the header was wrenched out of the support post. Fortunately, the header landed on the panel underneath it. Otherwise, this would have been a lot worse and it probably would have fallen ON one of the boys. Eeek! 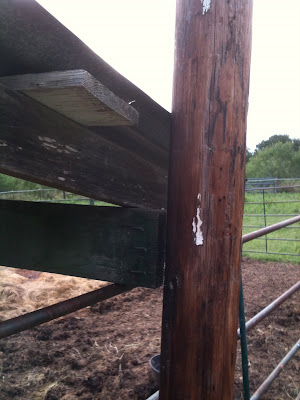 Based on the way the nails pulled out of the post, I'm guessing that one of the boys was rubbing on it and just wrenched it loose. This is why you use screws in construction instead of nails, if possible. They are a lot harder to pull out!

The boys will be out in the pastures until tomorrow night, when I have a chance to fix this. I don't want to chance one of them hitting anything and getting hurt! As far as fixing it goes, I need to pick up a 2 ton floor jack. The plan is to get a 4x4 and cut it more or less to size, prop it up under the header that's fallen, then jack it up back to the correct position and screw it all back together. 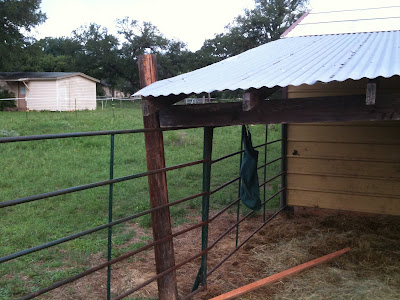 Nothing a 2 ton floor jack, a handful of deck screws, an a little ingenuity can't fix.

And after I get it repaired, I will be calling the recommended barn manufacturer and getting quotes on the new barn. :)
Posted by jenj at 9:26 PM