A number of you sent e-mail congratulating us on adopting Anie, our Great Pyrenees guardian dog. Unfortunately, we did not have a chance to introduce her to our chickens the night we got her, and the chicken's yard area didn't get locked that night. I'm sure you can see where this is going - the next morning when I went out to feed Anie and the chickens, only to find her standing over four dead chickens.

I have to say, it was one of the most horrible moments of my life, and my husband's as well. Here we had invited an animal into our home to guard, and instead she had killed our pet chickens. The chickens were still warm, so it had just happened, and one of them was still slightly alive. My husband ended up having to drown that one to end her suffering, which was just awful. The kids were absolutely devastated, and there was immediate discussion as to whether or not to keep Anie.

In the end, we decided that the chicken incident was probably our fault. We left the gate unlocked, and she simply pushed her way in. We didn't lock the coop (we normally don't) so the chickens didn't have any protection. We also didn't introduce them because it was night and the chickens were asleep. Anie seemed to think that they weren't supposed to be there, so she took care of them. As soon as I saw her, I told her "NO!" and she immeditely left them and looked chagrined. And in general, she's such a sweet girl it's really inconcievable that she would hurt something unless she thought she was supposed to do it - she is a guardian dog after all, and it's her job to take care of anything that's not supposed to be in her territory.

So, we decided to keep her and introduce her properly to chickens. First, we had to get several more chickens, so we found someone who was selling older laying hens on Craigslist and picked up 5 of them (as an aside, they're really laying well!). We also got some younger "nuggets" who will be our next batch of layers. Over the last week, we've gradually been introducing her to both sets of hens, mostly by holding them up to her and letting her sniff them. 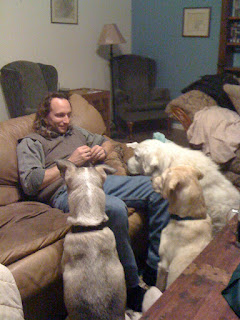 Generally, Anie doesn't like to come in the house. However, we've lured her in a few times to groom her. Here the hubby is keeping all three dogs occupied with bits of cheese. Attentive dogs! 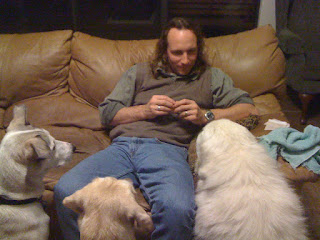 Surprisingly, Anie is not that much bigger in size than Elias is. However, she seems to be broader in her body and is definitely much, much poofier! We're not sure how much she weighs though, but we're planning to take her to the vet this weekend. 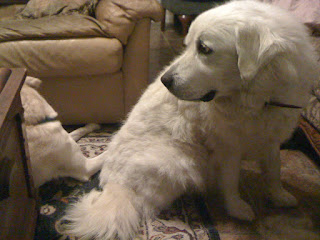 Anie after her second grooming. The mats are almost gone, except for a few on her haunches which are very hard to get at because she spends so much time sitting or lying down.

For the past week, we've kept the new chickens in their yard. We've shown them to Anie daily and introduced them as friends. She's sniffed them but was otherwise uninterested. We took her into the yard, supervised, and she watched them a bit but was otherwise more interested in being petted. So far, so good.

Today, we let the chickens out into the main part of the backyard and supervised Anie while she was out with them. Again, she wasn't very interested, and after we went back in the house, took up her customary spot on the back deck. 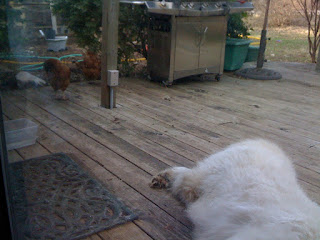 Chickens getting closer. Anie continues to do her imitation of a doormat. 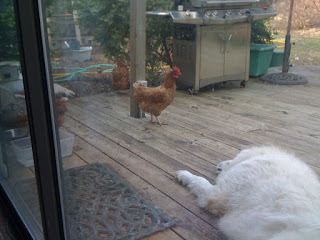 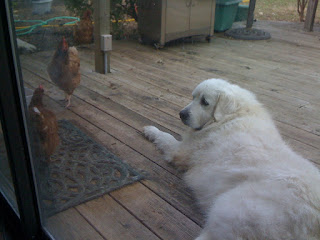 Anie looks mildly interested that a chicken is on her doormat. 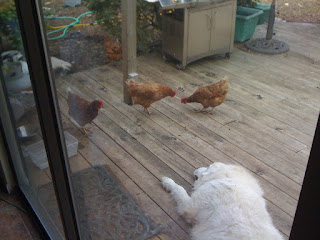 The chickens were out for the afternoon and the entire time, Anie layed quiescently on the deck. When the chickens got close, she watched them, but didn't make any moves toward them. Eventually they put themselves to bed in their coop and Anie reminded us it was time for her dinner. We locked the chickens in their yard for the night but will let them out in the morning for some more supervised time with her. However, overall, it seems like a very successful introduction and we are hopeful that Anie will turn out to be a good chicken guardian.

During the last week, we've gotten to know her quite a bit. She's only barked once, a deep "WOOF" sound, immediately after which we heard a loud rustling sound in the woods behind our house - so something was back there and she was letting it know not to come any closer. She doesn't get excited when the dogs on either side of our house attack the fence - unlike Elias, she just ignores them. She spends most of her nights in her bed in our shed, apparently keeping watch. During the day, she likes to lay on the doormat by the back door. She spends so much time there, we've taken to calling her the Poofy White Doormat. Certainly she just looks like a big lump of fur!

She's a sweet, sweet girl and likes her pets, but has no interest in running with the other two dogs. She nearly always lays on her right side, I think because there's something not quite right in her right hip or right leg. She's stiff when getting up, but she can bound around if she wants to. I think she may be older than the 6.5 years she was advertised as being, but we'll know for sure when we take her to the vet. Even if she is older, that's OK... she's a good introduction to the breed.

So right now, it looks like she'll be staying with us. Please keep your fingers crossed that she continues to guard the chickens, because we'd really, really like her to become a permanent member of our family!
Posted by jenj at 5:12 PM