Yeah, it's all worth it

If you’ve been keeping up with this blog, or if you’ve been one of the very kind people who have helped us out, you’ll know how much time and money we’ve poured into this house project (and hey, this is only the beginning!). At times, we’ve wondered if we’re doing the right thing – after all, a 1951 ranch house in desperate need of repair isn’t exactly our dream house. If we’re honest, we pictured something more along the lines of a nice Tudor-looking place, or perhaps a nice turn-of-the-century classic South Texas home. And no matter how much wiring we fix, plumbing we redo, or paint we apply, it will still be a 1951 ranch house, even though we plan to eventually change the front of it a bit.

Plus, it’s not home. We’ve lived in our current house for 8 years. The kids have pretty much grown up here. We’ve done all the work on this house ourselves, with the exception of gutting the kitchen. We added a deck, renovated both bathrooms, put a French door in the bedroom, and totally renovated the kitchen. It’s our home. We love it, and we have lots of great memories here. We’re excited about the new place, but we have to leave our home for it. That’s a little hard.

And, it’s been one thing after another with the new place. The electric. The plumbing. A new water heater. We had some idea of what we were getting into when we bought the place, but in retrospect, we had no clue the magnitude of some of the issues. We really had no good concept of just how many steps it takes from ripping out drywall to putting it back up and getting on that final coat of paint and saying it's stick-a-fork-in-it-DONE. And really, in any smidge of spare time we’ve had, we’ve done nothing but work on the house since we bought it. Not to mention roping in all our friends and relatives and having them help us too.

So you might understand why we've had a few moments of "What the heck are we DOING???" in the last few months. I don't think we've really quite admitted it out loud to each other, but the sentiment has been there a few times. So last weekend, we finally, finally got to take advantage of the thing that led us to buying this house in the first place.

We took the horses for a trail ride.

Ok, I know, it doesn't sound like much, but it's the first time I've ridden since before Christmas and the first time since the hubby's ridden since we last went foxhunting. And while the day was gorgeous, we were both tired and didn't have much time, but we figured that we deserved it after all the hard work. So off we went - 20 minutes from snagging the horses to being in the saddle headed out the gate, and man oh man is that a nice thing! 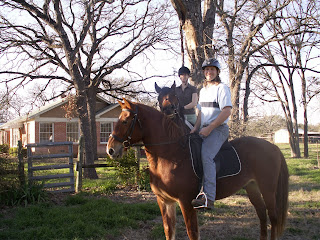 The hubby on Red and me on Saga; the east side of the house is in the background. 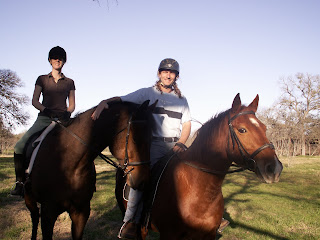 Yeah, we could get used to this... riding right out the back gate and onto the trails. Wow!
Saga, I confess, was a pill - jigging and throwing his head. Red was his good solid self, if a bit more energetic than usual. We had no idea where we were going, so we randomly followed a few trails, taking rights and lefts without paying much attention to where we were going. About halfway into the ride, we met another girl on a handsome Palamino named Amarillo who took us on a bit of a tour. She showed us a bunch of trails and an actual riding arena that's on city property! I admit that it doesn't have improved footing, but it's got 4 fenced sides and is about the right size for a dressage arena (a bit bigger maybe) so I will be making use of it when the footing is good.

Speaking of footing, the trails are just amazing. A few rough spots to be sure, but mostly excellent footing, and plenty of room for trotting and cantering. It's mostly flat but there are some gentle hills we can work on, so I'm no longer worried about how I'm going to condition Saga when we get back into eventing. As long as the footing is decent, we've got plenty of space to ride! 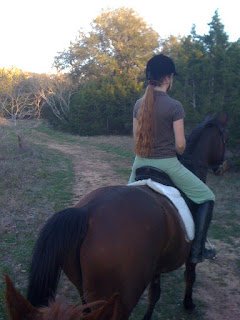 Headed home after a 1.5 hour ride.
The hubby and I were out for nearly 1.5 hours and there are PLENTY of trails that we didn't get to go on. I can't wait to explore more!

UPDATE: Since I wrote this post, I've been on two more rides: one by myself on the land right next to the house, about 20 minutes of flatwork, and another 30 minute trail ride with my stepdaughter. Have I mentioned how incredibly awesome it is to be able to do this on a moment's notice???
Posted by jenj at 4:39 PM