Growing up in south Louisiana, I pretty much learned to garden by the following method: stick whatever you want to grow in the ground, then chop it back every 3 to 6 months so that it doesn't take over your entire yard. I remember once covering a newly-planted garden with a tarp during a late freeze, but we didn't get around to taking the tarp off until about a week later. The tomato plants went from about 6 inches to nearly 2 feet in that time... and I am not exaggerating!

Here in central Texas it's a little different. The soil is extremely alkaline - if you have any soil at all. Rainfall is sporadic - we just went over 3 weeks without rain, and it's only mid-May. And of course, summers are hot, hot, hot - we often have days in August and September that are over 110 degrees. All this means you'd better plant early, hope for rain, and gather your spring harvest before mid-June.

So tonight I picked another handful of green beans, with are once again doing great - I only wish the chickens hadn't gotten them when I first planed them, because they are the one thing that's really producing. I took most of the rest of the snow peas, which are being savaged by aphids. There are gobs of ladybugs out there, but they just can't keep up, and it's getting really warm for snow peas. The smaller bush snow peas in the middle row have all but died, and the bigger peas are on their last legs. I'll probably do my last harvest in another few days and then turn the plants under. 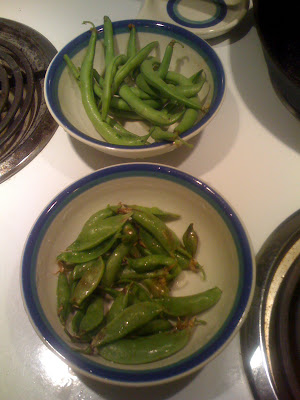 Green beans on the top, sad-looking snow peas on the bottom. This might be enough for the hubby and I for a veggie for one meal.
I also pulled up the potatoes tonight, since the plants were looking pretty yellow and sad. I really wasn't sure what I'd find, but I pulled out 14 potatoes of varying sizes. Not a spectacular harvest by any means with 8 plants, but I did plant very late. At least I grew SOMETHING and they didn't get eaten. I actually decided to stick the plants back in the ground since a lot of them had teeny little eraser-sized potatoes on them - who knows, maybe they'll make it through the summer and produce again in the fall. Tasty-looking taters.
Something I did find a ton of in the garden was these big white grubs, which I think are Japanese beetle grubs. I must've seen dozens of them, and of course it was too late in the day to get the chickens. Tomorrow I may go out and nab a bunch of them to feed to the girls, or even just let the girls hang out in the garden for a bit and hope don't scratch things up too much.

So the bottom line is that most of the cool-weather plants are done. The onions are starting to fall over, so probably another week or two before harvest. Then it's just the tomatoes and peppers, which are growing well but not really flowering and fruiting yet - and it's getting way late in the season. It's a good thing I've got a farmer's market nearby and don't have to depend on what I grow to feed us, because I'm not doing a very good job of it. I am glad I grew something this spring though - it's very satisfying to at least get a few veggies out of my own garden. Still, I've got a long way to go before we become more self-sufficient in the veggie area.
Posted by jenj at 7:00 AM