KEEP OUT! THIS MEANS YOU, REDDUMS!!!

Red has, as far as we can tell, Prehensile Lips. He can open gates and undo latches. The first night here, he decided he was done with the small paddock and let himself and Saga out to munch on the pasture. At our old barn, he managed to let himself out on a few walkabouts, and once let several other horses out to join the fun. In the case of the feed shed here, he's after the 200 or so pounds of feed I keep on hand... for Saga. Red gets a mere handful each night, since he's trying to lose that round-bale look.

Now, in Red's opinion, this is Not The Way The World Should Work. He too should get 3 lbs of feed twice daily, preferably more. Since he doesn't, he must go after the feed himself. To do this, he must open the shed. Last week, he figured out how to remove the (supposedly horse-proof) bull snap that kept the shed closed. So, we got a padlock.

Yes, there is a padlock on my feed shed. To keep Reddums out.

Thusfar, it has foiled him. Let me demonstrate: 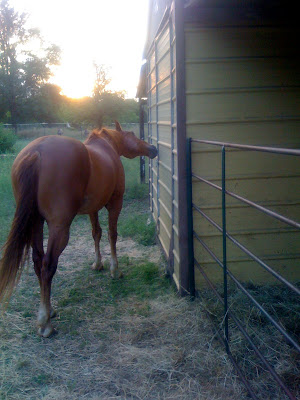 Me: Um, Reddums, what exactly are you doing there? 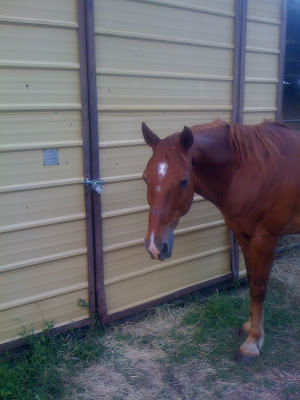 Cute Little Reddums (note the adorable, innocent face): What??? Oh, Hi Mom! Nothing, nothing at all, it's just... 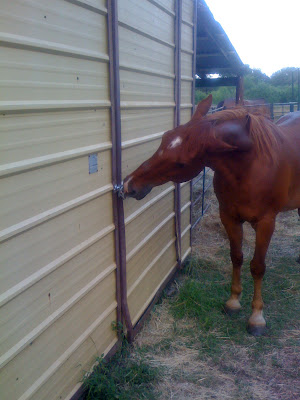 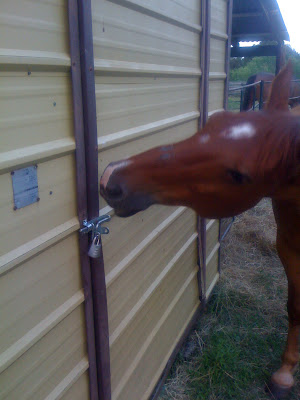 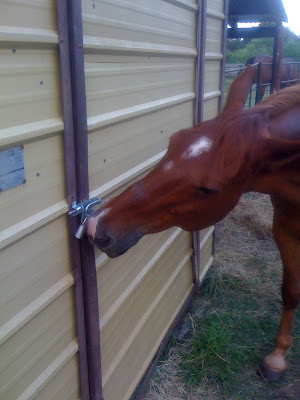 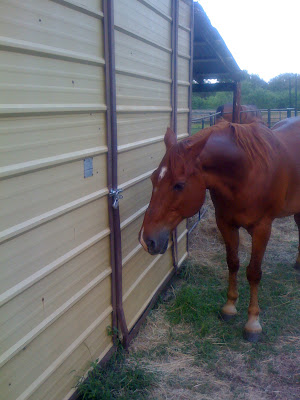 ...wait a MINUTE!!! You replaced the bull snap with a padlock, didn't you?!?!
(Note the disgusted look on his face. Ha! Foiled him!)
Um, mom? Could you at least tell me the combination? Puh-leeeze? Before I starve?!?!?