Not 10 minutes ago I went out to the back pasture to get the boys to move them to their new pasturage, and I saw this handsome guy as I stepped through the gate: 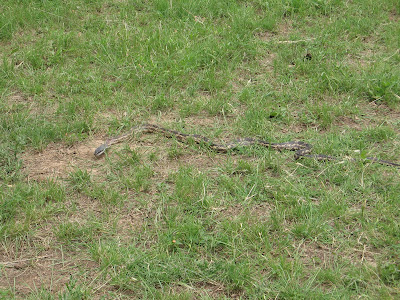 Ok, I admit, the first words out of my mouth included several four-letter words and an accelerated heart rate, but once I realized he wasn't venomous, I ran for the camera. 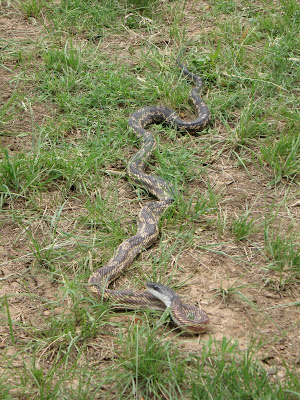 Pretty sure this guy is a Texas Rat snake, and he was probably somewhere between 5 and 6 feet long.
Now while finding such a large snake in the back pasture was more than a bit startling, I didn't feel so bad after looking at these pictures, where there are rat snakes hanging out (literally) in people's doorways. 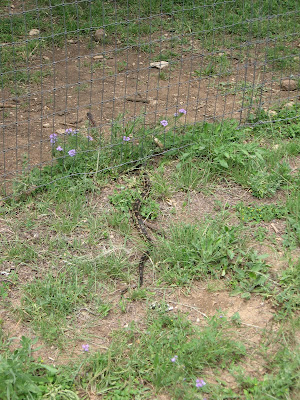 On his way to the neighbor's pasture.

I should mention that I used to keep a rat snake as a pet when I was younger, and I volunteered at the Louisiana Nature and Science Center in the herpetology department, so snakes are pretty familiar to me. However, if you come across one, it's always best to steer clear of them. A snake this size, while non-venomous, can inflict a good bite if you try to pick him up and don't get it right. And snakes are incredibly strong for their size and can be difficult to handle. There's absolutely no need to run for a shovel to try to do him in, either - not only is he harmless to humans, his main diet consists of rats and mice, so he's very beneficial in a place like this!

I sorta hope that he makes a home under the back shed or under the small house, but if not, maybe he'll at least come back for an occasional visit!
Posted by jenj at 1:29 PM