There's just no point in looking at the forecast anymore. It's just too depressing. 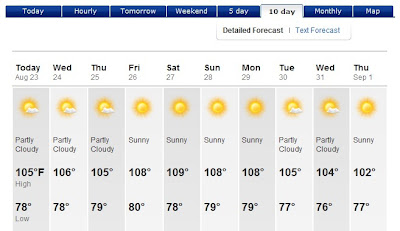 And to add insult to injury, 75% of the state is in the worst drought in history. The last good rain we had at the house was in September 2010 when Hurricane Hermine came through around September 7... almost a YEAR ago. Since then I think we've had two small showers, less than 2 inches each. 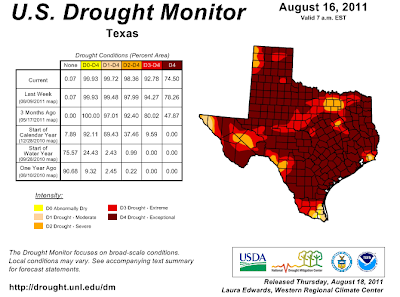 I'm lucky - I have plenty of hay, and the boys have cool(ish) shady places. However, the pastures are burned crispy - the grass literally crunches when you walk on it. To save the pastures, the boys are only out on the track and have been since... I dunno, April? The grass will hopefully come back once it rains, but until then, it's a dry, brown wasteland.

Gah. I'm hoping for a nice tropical storm to dump 10 inches of rain on us. 15 or 20 inches would be even better. Temperatures below 100 degrees would be nice too, but I'd probably have to get out a sweatshirt - the mid-nineties sounds positively chilly!