Anie hasn't been featured on here in ages, mostly because she doesn't do anything terribly interesting. At night, she guards the house. During the day, she sleeps. We finally managed to convince her to come in the AC, since our daily highs have been 105 pretty much since May.

In the morning when I'm done with the horses, Anie gets a quick groom with the slicker brush, and then she trundles in to snooze for the next 12 hours on the cool tile floor in the hallway. 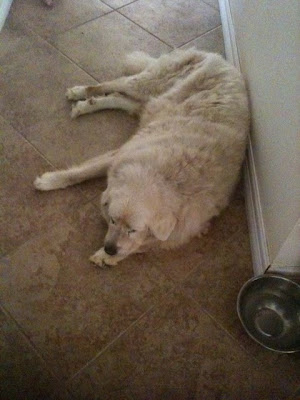 Did I mention that she snores? Loudly?

When I get home from work and put Elias out, she usually just blinks sleepily at me and takes another snooze. Then around 7 pm, she decides it's time for guard duty and goes to stand by the door until we let her out. This arrangement seems to be working well for all involved.

WARNING: Icky wound picture. If you don't want to see it, don't scroll down.

This morning when I went to groom her, I noticed a pinkish fluid all over her chest. I couldn't see anything immediately wrong, so I brought her in and got out the scissors. MC was over to ride early, and she used to be a vet tech (among many excellent skills!) so she did a very neat trim job to discover an absolutely enormous abscess that had formed on Anie's chest. The pinkish fluid was liquid draining from the abscess. 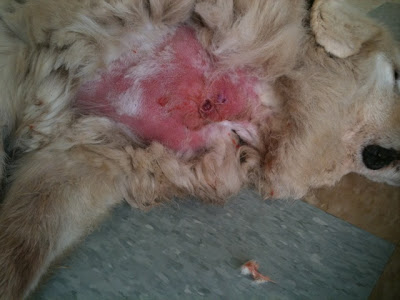 No, she's not dead, she just fell asleep at the vet's office while she was being clipped.

I managed to get Anie an appointment at the vet, where they clipped the area. The abscess itself is alarmingly large, but because her fur is so thick, we could barely see it until we'd clipped the area. The good news is that it's draining well and isn't infected, so it must have ruptured during the night. She never showed any signs of distress - was still eating and drinking - so I never would have known if it hadn't ruptured. She's on antibiotics for the next two weeks, which she thinks is great, since I dip the pills in peanut butter for easier eating.

As to what caused it, when we were clipping her we found some mesquite thorns in her coat. She must have gotten one stuck, poor thing. The vet asked if I'd ever considered clipping her, and I said I had but explained the reasons why I decided not to (namely, sunburn and bugs). The vet said she understood but was concerned that we might have problems in the future with foreign matter getting embedded in her coat/skin, and because she has so much hair, I might not know about it even though she gets groomed daily. I've pulled matted burrs and foxtails out of her coat before, and every day she has twigs, grass, small rocks (not kidding here), and other stuff in her coat that I groom out, so it's definitely a problem. A friend found a pair of highly-recommended Andis clippers for me, and I'll be picking those up on the way home and working on her new hairdo tonight. Should I do a mohawk? ;)

Alas, I guess we won't be having any mid-week Poofs for a while after this.
Posted by jenj at 2:20 PM