My husband and I are having a tiiiiny argument about a painting in our living room. I hate it; he has an incomprehensible fondness for the thing. I want it gone, he's currently lobbying to put the damn thing in our bedroom, since we now have antique maps in its previous home in the living room.

I told him if it went in the bedroom, I'm sleeping on the couch in the living room. He's decided that it's not going in the bedroom.

He asked the kiddos if either of them wanted it for their bedrooms. Shockingly, they said no, so I guess taste isn't entirely genetic.

I even called his mother about this painting. After all, it came from his parent's house, so I figured they had some sort of attachment to the thing - or maybe it was painted by a great-grand-aunt and it was a family heirloom? The conversation went something like this:

"Hey, I have a really important question for you about that painting in the... yes, the brown one... yes, with the stream... So your mom and dad bought it off some street painter on a trip? .... And foisted it off on you? ... Hanging in the guest bedroom, huh? And then in the attic? ... So you were glad to get rid of it? ... No, I guess there's no accounting for taste, is there?"

I knew there was a reason I love my mother-in-law so much. 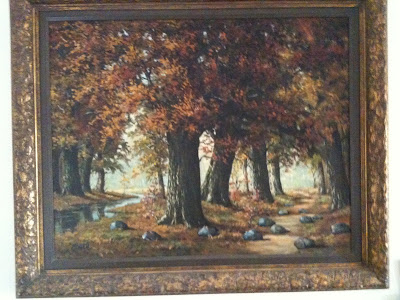 At first glance, you're probably thinking, "Oh, a nice woodland scene in the fall. What's wrong with that?" And then you look closer and notice that the stream is actually higher than the path. That is impossible - water always flows to the lowest point. Maybe this is an early attempt by MC Escher to mess with the viewer's head? If so, it's working. (P.S. Note that I even tilted the painting slightly to the left in a desperate effort to make the stream lower. No dice.) 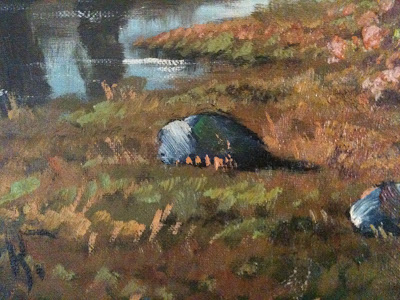 And those "rocks" in the painting? I swear that close-up they look like a herd of armadillos. See? IT'S AN ARMADILLO!

Too bad I don't have a guest bedroom or I could torture my guests with it. We do, however, have an attic...

(Note: At this moment the husband is saying how mean I am to his painting. He says that it will melt in the attic. Oh, the HORRORS! But I've gotta get it out of my dining room... anybody want a slightly strange painting of a herd of armadillos? Free to a good home!)
Posted by jenj at 9:39 PM