Not a happy sight. 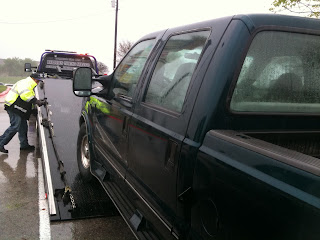 Yesterday, on the drive home from picking up a friend's cargo trailer, I noticed the Overdrive light was blinking on my truck, Grendel. Since I'd just had it in to replace the tires, I called the dealership to ask them about it. They said to could be something major with the transmission (it wasn't downshifting on the highway, but it doesn't do that anyway when OD is on) so to bring it in right away. I stopped on the way home, but they said they couldn't work on it with the trailer attached. It was still driving OK - the transmission wasn't slipping or anything - so I decided to quickly head home to drop the trailer.

1/4 of a mile out of the dealership, my poor truck died at a stoplight on the Interstate access road. The engine was on, but the gears would not engage no matter what I shifted it into. I was on a slight incline, and all I could do was roll backwards into oncoming traffic. The adrenaline started pumping and I weighed my options. Then, in one of those split-second decisions, I realized that there was a gas station just to my right and slightly behind me. I took my foot off the brake and angled the trailer into the gas station parking lot, praying that oncoming traffic would just avoid me. Unfortunately, a car pulled up behind me and I had to stop, then didn't have enough momentum to get all the way into the parking lot. My truck was sticking out, halfway in a lane of oncoming traffic, and I could go nowhere. Talk about a frightening experience!

I put the hazard lights on and got out of the truck, figuring that if I was going to get hit by oncoming traffic, it would be better if I weren't in the vehicle. I called the hubby in a panic, and he suggested I try turning the truck off and on again. It worked! I got it in reverse and backed about 50 feet into a parking space, then turned it off and waited a minute to stop shaking.

Even though the dealership was only 1/4 of a mile away, it was on a one-way access road, and I would have had to drive nearly 2 miles to get back. I wasn't willing to risk having the truck stall out again in traffic, so I called a tow truck. Meanwhile, the hubby called Fuzzypony to see if we could borrow HER truck to get the trailer home... fortunately, he was at home and not with me, so he was able to go pick her truck up. An hour later (during which I consoled myself with an Almond Joy from the convenience store at the gas station), hubby arrived, and we unhitched the trailer just in time for the tow truck to get there to pick up poor Grendel.

They will look at my truck tomorrow. At first I was worried that the transmission was toast (a $3500 rebuild), but it's never slipped or had trouble shifting even though the truck has 192,000 miles on it (go diesel trucks!!!). I did a little research on the Interwebz, and apparently the blinking Overdrive light can be a symptom of a number of things, including a faulty speed sensor (although the speedometer was working fine), bad solenoid, or failing torque converter. Of course, it could be that the transmission just up and died too, but given the lack of other problem-tranny, symptoms, I'm hoping not.

This truck has been a total workhorse and has never needed anything more than routine maintenance. It's a 1999 Ford F-350, and we use it for EVERYTHING around here - hauling building materials, the horse trailer, and of course, pulling down concrete cisterns.  I'm hoping it will go another 100,000 miles or so. Fingers crossed it's not time for a transmission rebuild just yet!
Posted by jenj at 10:12 AM