Ultrasound, Adequan, Panecure, and how we nearly burned down the barn

First of all, Saga's ultrasound was Monday (sheesh, I'm so far behind). IT WAS CLEAN!!!! The radiograph was clean too, so we are left wondering why he's got fluid on his stifle. I discussed other possibilities with the vet (namely, hock and suspensory), but he felt like the flexion test results, plus the  fluid he could feel on the joint, all pointed to something in the stifle. We ended up injecting the joint after a long discussion of pros and cons (and a lot of research by me over the weekend). I haven't ridden him since Monday, but now three days later, he looks... pretty good, actually. Fingers crossed!

The vet also noted that he was 1/5 lame on the LF in addition to being off on the RH. The vet attributed the lameness to Saga not having shoes on, even though he did not react to hoof testers (remember, we jogged him out in boots and pads). A little research shows that front/hind end lameness are often on diagonal limbs, so it's possible that the LF issues we've been seeing since last fall are actually related to the RH stifle issue. We blocked the entire LF last fall and he didn't go sound, so maybe it wasn't the LF after all but actually the RH? Or the LF issue is causing the RH. I'm grasping at straws? ANYway, I've noticed that he seems better on the LF today than he did on Monday. Of course, I'm watching him walk out in the pasture, so it could be wishful thinking on my part. Hopefully we'll get a handwalk in on pavement tomorrow and I can do a better assessment.

I've also started him on Adequan, per vet's suggestion. He's had two doses so far, four days apart. I will probably not do the entire loading dose of 7 injections but will try 5 and then do them monthly. So maybe the Adequan is helping make him feel better all over, I really don't know. So many things are going on at once, it's going to be impossible to tell what's causing what. That's frustrating for diagnostic purposes for sure, but if he's improving, I'm pretty happy with that!

In other news, I decided to do the Panecure Powerpac on the boys starting March 1. I don't do the every-other-month worming since I've had several fecal tests come out negative, but at the vet's recommendation I am doing the Powerpac to get rid of what doesn't show up on fecal tests. Luckily, everybody is really good about about worming... except Cash. And when I say that Cash is bad about it, I mean like flipping-himself-over-backwards bad. We've tried the molasses syringe and the applesauce and every other trick in the book, and over the years he's just gotten worse. Doesn't matter who does it either, it's just awful. So... I tried sneaking the Panecure in his food and you know what? HE ATE IT!!! So except for the first night, I've been putting Panecure in all the boys' dinners, and they're still licking the bowls clean. Cash is really picky too, so I halfway expected him to turn his nose up at his "contaminated" food - but he didn't. Anyway, if you are trying to Powerpac your horse, consider seeing if they'll eat it hidden in their dinner.

And finally, yes, we did nearly burn down the barn tonight. When I went out to feed tonight, I smelled smoke. There's nothing quite like the smell of smoke in your barn to set your adrenaline going!!! I frantically glanced up at the hay loft to see if there was anything there (no), the sprinted to the barn storeroom where the chicks are. The storeroom was filled with smoke - one of their heat lamps had malfunctioned and ignited the shavings they were on, which were smoldering. I yelled for the hubby, grabbed Anie's bucket of water (hey, it was handy!), and doused the burned area. 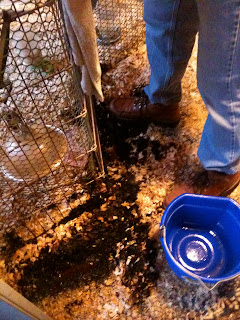 Burnt shavings. Fortunately that's all that burned... we were SO lucky.

We were unbelievably lucky. I don't know how long the shavings were burning, but eventually the fire would have reached the wooden barn walls and ignited them, and the whole structure would have gone up. We totally dodged the bullet this time. Whatever deity was looking out for us today, I'm eternally grateful.

Go hug your horse(s), and make sure you know where the fire extinguisher is in your barn!
Posted by jenj at 9:51 PM