White horse? Nope, don't have one.

Just in case you thought that the pictures from last week of Cash covered in mud were some sort of unusual occurrence (or somehow staged), I assure you they are not.

Cash managed to find a lovely spot to roll in after our trail ride this morning. It's an old garden area with loose black dirt. It sticks amazingly well to a wet horse. 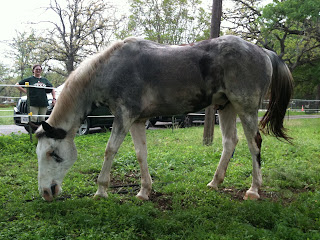 It's almost hard to tell which spots are new and which he was born with, eh? 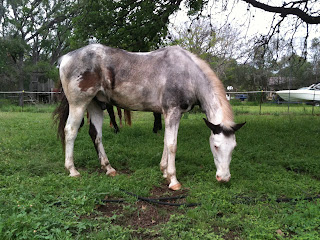 Sigh. Oh well, if you're gonna get dirty, you might as well do a good job and get both sides. 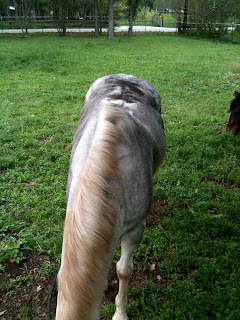 Aaaand the saddle area too. He seemed very pleased with his handiwork.

MC, Fuzzypony, and I had a nice ride this morning. We went and worked down in the retaining pond (minus the pond), just worked on a little trot and canter. I put the boots AND pads on today (yesterday it was just boots), and he felt really good. Nice forward trot, quite sproingy. We did a few canter circles both directions, and while the right lead transition sucked as usual, he picked up the left in only two or three steps. Yay for progress! He still feels sprawly, but I wasn't asking him to do anything more than canter on a loose rein, so it was pretty much what I expected. Afterwards we took the long way home and enjoyed the Texas springtime. 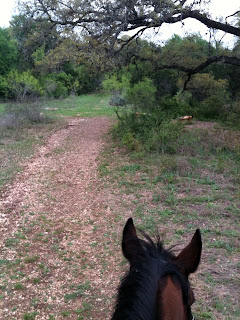 This afternoon I need to mow the back pasture before it starts raining again (flash flood warning goes into effect tonight... again). The boys have eaten most of the edible bits down to lawnmower level, so I'll whack down the weeds before they have a chance to propagate.

I hope everyone else is making the most of their weekend and getting some riding in!
Posted by jenj at 1:25 PM