The vet was out today to do annual teeth and Coggins (I do my own vaccinations so they're not all smushed together at once). Reddums checked out as normal in all ways, except his falling-down-drunk reaction to the sedative: 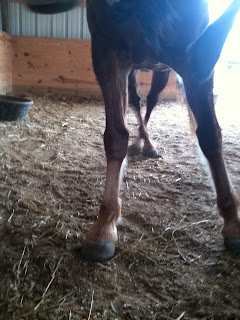 Next up was Cash. For a 23-year-old (he'll be 24 in April), the vet said that Cash's teeth look pretty good. He has one molar (209) on the top left that's cupping and is packing some food in, which may be causing him to eat less hay. We agreed to treat it conservatively and keep an eye on it, as well as up his feed to a level more appropriate for a horse eating minimal hay. I recently changed him over to Triple Crown Senior, and am working him slowly up to roughly 5 lbs per feeding, twice per day, plus a bedtime snack. 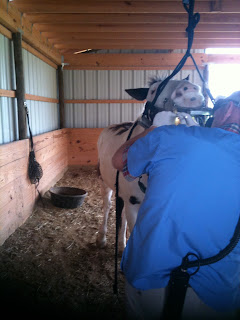 Mmmfrnnnddddlllp. (Horse speak for "I'm gonna get you later for this, mom")

Saga... where do I start. I showed the vet my concerns with his front feet and he agreed 100%. We discussed taking rads of his feet to see how the sole was doing, but a quick squeeze with the hoof testers showed that it would be pointless. The sole was just as flexible as it was in November - in other words, the shoes have done NOTHING to help build sole depth. The good news is that he wasn't at all reactive to the testers, so we are starting off well. He also showed no response to palpitation on his back or in the sacral area, where he was sore in November, so that's good too. Unfortunately, given the condition of the soles I don't think the vet was excited about me taking him barefoot, which I understand. I'm still torn about it too, but something needs to be done about his feet.

I booted him up (since we'd be trotting on tarmac) so we could check the hind end for issues. He's been having trouble with canter transitions, and he's been feeling uneven when I change from one posting diagonal to the other, so I wanted to have the vet look at him. Long story short, he's got fluid in the right stifle and flexion made him trot worse. We took rads of the joint and they came back clean, but there's concern that it's a soft tissue injury. The portable ultrasound was with another vet today, so he's coming back Monday to ultrasound the area (unless I can get an appointment for him tomorrow, by some miracle). Worst case scenario, three to six months off.

Awesome. At least three to six months off will give him time to adjust to barefoot, right? Sigh.

I sort of have a semi-plan at this point, but we're basically on hold until we get the ultrasound results back. Until then, I'm reading up on stifles. Keep your fingers crossed it's something minor.
Posted by jenj at 10:30 PM