Last week, my vet was out to check Saga's right hind. The problem seemed to be the stifle (toe dragging, fluid on the joint), so we did a radiograph and ultrasounded the joint. Everything showed up fine, but we injected the joint anyway. It seems to have worked - Saga feels great behind, and there is no more telltale toe-dragging. Yay!

During the lameness exam, my vet commented that he was a little off on the LF as well. That's the leg we had all the issues with last fall - we blocked it twice and he didn't come sound, then blocked the foot a third time, which seemed to help. Radiographs of the foot showed nothing, but he's got thin soles so at the time we decided to shoe him. Whether he's been 100% with the shoes on is hard to say - he tends to shuffle on pavement to avoid slipping, but he feels great on soft surfaces. Recently the shoes came off, and now we're back to him being noticeably short on that leg (although he is not head-bobbing lame).

I've been using hoof boots, and I wanted to see if they were making much of a difference in the way he moves. I took a little video, but I'm having issues with video editing so instead I captured some stills from the video. 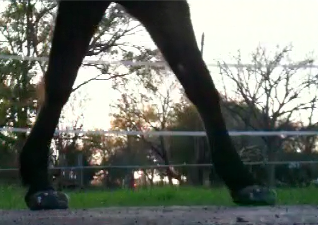 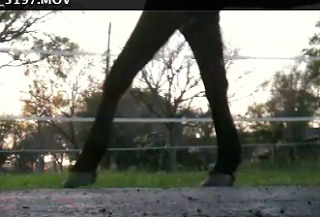 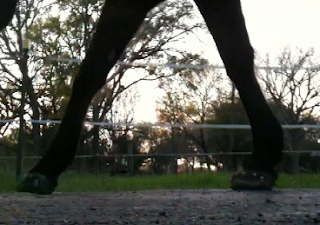 RF with boots. Heel first, but it's a little hard to see. 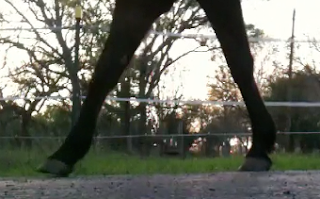 As I was looking at the stills, I noticed the difference in the angles his legs were making, so I decided to measure them. I wanted to see how much of a difference there was between the angles of right vs left, both with and without boots. I busted out with my incredibly rusty trusty trig skills (read: I found a web site with a handy calculator since I couldn't remember past the Pythagorean theorem) and did a little calculating.
Take all these measurements with a large grain of salt. To do a really good study I'd need a more accurate way to measure angles, and I'd also need a larger sample size of strides to compare. Ignoring those two tiny details, here's what I think this means:

I'm going to go out on a limb and say that it's likely that wearing boots and wearing shoes produces similar movement in this situation (that is, both shoes and boots allow for a larger LF stride, and more even stride length between the LF and  RF). While riding tonight on the tarmac, at a walk, I was constantly trying to feel if he was uneven anywhere. Maybe a tiny bit? But he was stepping out really well so maybe not? I honestly couldn't tell, and probably would not have noticed anything if I hadn't been scrutinizing every step.  This tells me that I cannot tell when my horse is uneven to the tune of 3 degrees in stride length. Ergo, he could have been just as lame in shoes as he is in boots, and I am not sure I would have been able to tell. He always felt a little uncertain in shoes on tarmac because he tended to slip. Out on grass, he looks 100% at the trot without boots, but of course that's on softer footing. I won't be able to tell how he is in boots on softer footing under saddle until later in the week.

I'm calling the vet tomorrow to make another appointment to see if we can pinpoint the problem with the LF. If past history is any indicator, the problem will not go away when the foot is blocked (although given the fact that he's noticeably better in boots, it seems logical that the problem is in the foot).  Which begs the question... where the heck is the problem??? I'm taking bets, so start speculating wildly!
Posted by jenj at 10:49 PM